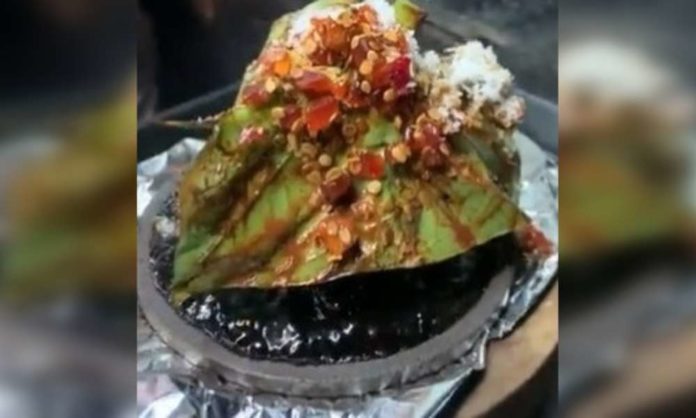 If there’s one dessert that has come about to be a hit across age groups, it has to be the brownie. A mix between a dense fudge and cake, the brownie is truly a feast for the senses. This is why we commonly find chocolate brownies with ice cream on the menu of many popular restaurants. However, one fusion brownie prepared by a restaurant in India has left the internet stunned. Twitter users came across a weird ‘Paan Brownie’, and it indeed left a bad aftertaste in the mouths of many internet users.

Since it was uploaded on Twitter, the video has amassed more than one lakh views along with outrageous reactions from netizens. People expressed their disappointment over the unusual pan and brownie dish, while many even accused the cook of preparing it. Some even said they wouldn’t eat pan after watching this video, and some said they would like to taste it. A large number of people expressed displeasure at seeing that they ruined both brownies and paan for them.

Pan and Browny Combo. Only from Ahmedabad, Gujarat. 👍🏽👍🏽 pic.twitter.com/ggXwGURFS1

In the viral video published on Twitter, a person is seen preparing a bizarre pan. The video opens to show a piece of chocolate brownie kept on a heated plate on top of which he drizzles some amount of chocolate sauce. Then he adds a scoop of vanilla ice cream, another layer of chocolate sauce, and finally a paan twist.

Read More: This Twitterati Tried Makai Ki Roti With Noodles, Would You?

While the weird creation did look aesthetically appealing, Twitter users could not understand the need to innovate the dish in the first place. Several people thought that the combination of Paan and chocolate was indeed a bad idea. Others wondered why such innovations were found mainly in Gujarat only.

The post mostly left netizens unsure of the combination, with some even accusing the makers of ruining both brownies and paan for them. Nevertheless, there did seem to be a few takers for the unique treat. One person pointed out that they have seen worse combos like Oreo Pakodas.

Take a look at the reactions.

You know what.. you don't need to mention Gujarat for such posts… People already know most horrendous things start from Gujarat.

Paan Brownie is not the only bizarre dish to have gone viral in the recent past. A street food stall in Ahmedabad recently grabbed our attention with a curious and strange Oreo Pakoda. Believe it or not, the chocolate cream biscuits were dipped in a besan batter and then deep-fried!

What are your views on the weird food combos? Let us know in the comments below.