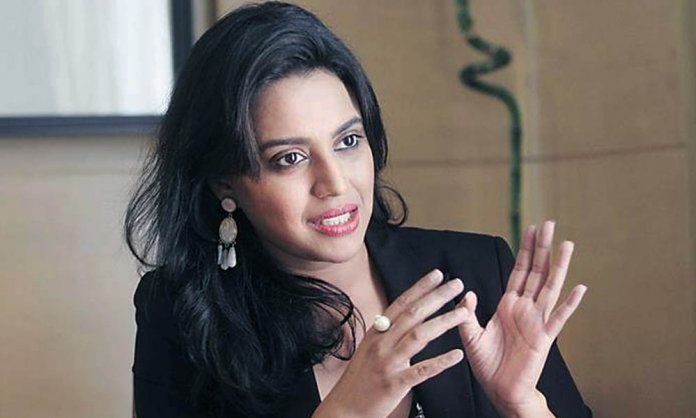 Veere Di Wedding might be minting massive moolah at the Bollywood box-office. However, the flick has ignited a wave of backlash from Pakistan.

In an interview, one of the ‘veeres’, Swara Bhasker, said some strong statements about Pakistan.

Speaking to  Rajeev Masand of News 18 on June 2, the actress labeled Pakistan a “failing state”:

“I don’t understand why we keep taking pleasure from all the silly things that happen in Pakistan”. The lady also went ahead to claim that Pakistani’s have a “way worse vocabulary than we do”.

Needless to say, her comments not only left a bad taste in the mouth for Pakistani’s who had been excitedly waiting for the the film, but has also created a social media storm!

Read all about it here:

In response to Swara’s statements, several Pakistani celebrities came out in support of our country.

Bashing the B-town celeb for her choice of words, Urwa Hocane posted several messages for the actor, calling her out for her contradictory statements.

Pakistan is the country that you @ReallySwara referred to,in 2015, as the “Best country you have ever visited” and it has only gotten better in the last few years in every aspect along with when it comes to having bigger hearts and welcoming our guests . 1/3

2/3 While you’re on this spree of empowering women,i must say you’ve become a bitter person. And all of this is odd coming from a citizen of a state that bans their own films i.e. #Padmavat so let’s not talk about women empowerment.

3/3 This only reflects on u as an ignorant person who is also quiet contradictory in her own statements. It’s not a failing state for sure but u come across as a “Failing Human Being” !!! @ReallySwara

From the citizen of the Phenomenal Pakistan 🇵🇰

Actor Gohar Rasheed too had a few things to say to the Bollywood actress:

In your interview you said “#Pakistan is a failing state, I don’t understand why we keep taking pleasure and feeling sense of self worth from all the things that happens in #Pakistan”.  Let me inform you that #Pakistan is the 5th largest market for Bollywood films, (4/10)

So here's the reason why you take pleasure and feel a sense of worth from all the things that happen in Pakistan.  Its the Pakistani fans and authorities that can determine the fate and worth of an Indian film in the global box office. (5/10)

Armeena Rana Khan was seen sharing some advice for the actress:

There’s a way to promote a film and then there’s a back-handed way to do it. I know you are relatively new but you’ve been ill advised by your PR (if you have any) you can’t antagonise an entire nation. Some ppl were actually looking forward to your film. #Spreadlovenothate

Promoting unity, here’s what Mehwish Hayat had to say in response to Swara’s tweet!

The comments made by @ReallySwara & Kangana Ranaut earlier just go to prove the point that I have been https://t.co/8RoaMTehPK cannot ignore 70 years of history & when the chips are down their nationalism will always come up trumps.The fault lies with us who see their indust..1/2

Industry as the height of achievement &remain so much in awe.We don’t need their validation,we know what we’re capable of.We should be proud that we’ve come so far in such a short period of time with little or no resources.Friendship yes,but not at the cost of our self respect2/2

In the face of all this backlash, it was only a matter of time that Swara would respond and respond she did!

Here’s what the ‘Veere Di Wedding’ actress had to say in her “defense”.

🙈🙈🙈🙈 Dushman ka dushman Dost!!! I’m totally okay with with being the dushman in this case if it brings some dosti to us bickering neighbours 🙂 🙂 Peace and love guys! ❤️ https://t.co/Fz82K6Wj9b

And that’s not all the ‘Tanu Weds Manu’ actress had to say!

Looks like Indo-Pak peace is on the horizon! 🙈🙈🙈✌🏾✌🏾✌🏾✌🏾💕💕💕💕💕 #DushmanKaDushmanDost pic.twitter.com/sq4foSDhFc

And when that didn’t help in soothing the matters, she ended the “debate” by posting that her love for Pakistan remains unchanged.

Thanks Anshul! there should we a distinction between States/ govts of a country & the people of that country. My regard for & goodwill towards the people of #Pakistan remains unchanged. Some of my closest friends are Pakistani. Lahore remains one of my soul cities. ❤️❤️💕💕 https://t.co/JHImDSnwKU

Really Swara? We get that to promote a film, one does tend to be a bit controversial – however, this time, it seems that her statements struck a wrong chord with her audience.

What did you think of Swara’s statements? Let us know in the comments below.