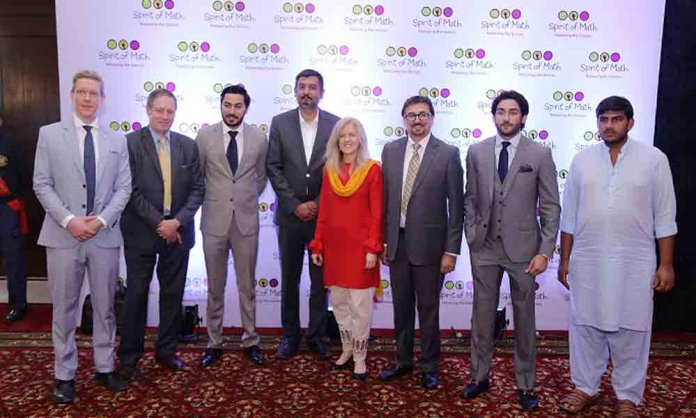 Spirit of Math (SoM) hosted a press conference titled “Releasing the Genius® in Pakistan: A meeting of great minds and great ideas” at a local hotel today.

3D Memes in Marketing the Next Big Thing?

Kimberley Langen, the award-winning CEO and co-founder of Spirit of Math spoke about the vital nature of unleashing innovation and imagination as drivers for the development of students into the leaders of tomorrow’s Pakistan. The gathering transformed into a collaborative ideation session moderated by Mrs. Langen in which all attendees including the Minister took part. The whole room was engaged in thoughtful discussion around key questions about the present and future aspirational states of education in Pakistan and contributed ideas that will be compiled and presented in the form of a “white paper” to Dr. Murad Raas.

Nathan Langen, Director of Business Development, Spirit of Math highlighted the significant accomplishments of SoM in Pakistan to date and set up a conversation of plans for deeper collaborations with all sectors in the search for and development of talent from the children of Pakistan. Mr. Langen announced World Mathematical Olympiad (WMO) Pakistan, a nation-wide talent hunt that will allow Spirit of Math to select and train Team Pakistan for the WMO. For the past 3 years, Spirit of Math has been selecting and training Team Canada that has won medals repeatedly in this global math competition. The 2019 WMO finals are scheduled to take place in Thailand with a team from Pakistan, selected and trained by Spirit of Math.

Addressing the audience, former Minister of Education Punjab, Mian Imran Masood reminisced the many challenges and key initiatives implemented during his tenure and his strong desire to bring such initiatives brought back to the forefront and reenergized with the current ministry under the leadership of Dr. Raas. He lauded Spirit of Math and thanked them for the incredible effort. He urged Dr. Raas to collaborate with Spirit of Math and take up the cause.

Imran Masood highlighted the role of the private school sector in enhancing the literacy rate in Pakistan and expressed a dire need for current Punjab Minister of Education Dr. Rass to collaborate with the private sector.

The minister welcomed Kim Langen and Spirit of Math with open arms to Pakistan. As a foreign graduate himself he understands the importance of education and the contributions rendered by the Langen family world over. He warmly greeted the CEO and expressed keen interest and desire to collaborate with Spirit of Math for teacher training, and the Spirit of Math contest. He emphasized that it is not about one government or another, rather a matter of ensuring that every child counts. He passionately underscored the fact that investment in children is an investment for our future generations. Dr. Raas will follow up with further discussions with Spirit of Math and develop an action plan.

As part of the Spirit of Math initiative, they will be introducing the grades 1 to 4 Spirit of Math Contests to find talent in as many schools as possible across the province, and exploring the possibilities of teacher training conducted by Spirit of Math.

ABOUT SPIRIT OF MATH:

Spirit of Math is Canada’s premier and largest after-school math program for high-performing students and a global leader in math enrichment. Spirit of Math’s unique curriculum was developed over a 30 year period in a classroom setting with students. At its core, Spirit of Math began with the ideas of Charles Ledger, a math teacher who developed the initial grades 7 to 9 curriculum while teaching at a Toronto-area high-school throughout the 1970s and 80s. In 1993, Charles’s daughter, Kimberley Langen, CEO and Co-Founder, took his unique curriculum to the private sector and began teaching the first cohort of Spirit of Math students from her home.

Within a few short years, the Spirit of Math philosophy towards mathematics enrichment rapidly evolved to multiple classrooms in larger permanent facilities. Today, Spirit of Math has grown to almost 10,000 students with more than 40 campuses across Canada, United States and Pakistan.

Spirit of Math specializes in the following areas:

The World Mathematical Olympiad is an international competition that was started in China open to students in grades 3 to 6 and is now written by students all over the world. Once a year, students from individual countries compete with each other nationally to earn the opportunity to represent their country in an international event. WMO not only challenges the brightest students from around the world with complex math problems focused on creativity and problem-solving, but it also encourages students to meet each other to create international friendships through a cultural exchange.

In Canada, Spirit of Math has been given the rights by WMO to form WMO CanadaTM to test, select and coach the Canadian team. In preparation for the international competition, WMO CanadaTM undertook a comprehensive selection process to determine who will represent Canada at the event. Last year, for the WMO Global Finals 2017 that took place in Beijing, China, Team Canada brought home a gold, a silver, and a bronze medal. At the WMO Global Finals in 2018, Team Canada brought won 11 medals at Stanford University, California, USA.