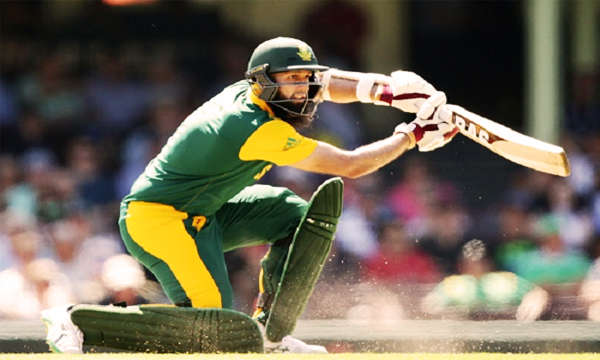 Chasing a modest 121 for victory in an inconsequential final league match, the Proteas rode on Amla’s unbeaten 56 to canter home in 17.4 overs and get some pride back in the sixth edition of the tournament.

Du Plessis was trapped LBW off Suranga Lakmal for 31 runs in the 12th over.

Amla, who struck his fifth T20 half-century, made sure that there were no more hiccups as he stitched a 47-run unbeaten partnership with AB de Villiers (20), who hit a massive six to seal the win. “It’s very bitter sweet. We are going back to South Africa out of the World Cup and it’s not where we wanted to be and we got only ourselves to blame,” he added.

In the first half of the game, the Proteas bowlers restricted holders Sri Lanka for 120 runs in 19.3 overs after Du Plessis opted to field first.

Sri Lankan opening pair, Dinesh Chandimal (21) and Tillakaratne Dilshan (36), did give the team a brisk start but soon lost the momentum after losing a couple of wickets.

Chandimal and Dilshan looked purposeful during their respective knocks as the duo got stuck into Dale Steyn’s second over which cost 16 runs.

But the introduction of spin changed the course for Proteas as Aaron Phangiso struck twice in his first over.

The left-arm spinner cleaned up Chandimal and then Lahiru Thirimanne for nought on the final two deliveries of his over to be on a hat-trick.

Phangiso failed to strike thrice but ended up with impressive figures of two for 26 in his four overs.

“It was tough to play what you call a dead rubber. But we play for our country and we are very proud to represent it,” said the man of the match Phangiso.

Dilshan tried to steady the innings amid the regular wicket-fall but became Farhaan Behardien’s second victim to be lbw while attempting a reverse sweep.

The South African dominance continued as Lankan batsmen failed to show application on a pitch that didn’t seem to have much devil.

“It was a really good start. But no one rebuilt it. Batting let us down in this tournament,” said Chandimal, who stood in place of injured skipper Angelo Mathews.

Medium-pacer Kyle Abbott bagged two scalps as new-ball partner Steyn also enjoyed just his second outing in the tournament after making Thisara Perera trudge back to the dug out.

Dasun Shanaka, coming in at number eight, made an unbeaten 20 to give some respect to the total, which proved inadequate against a star-studded South African line-up.

South Africa ended the league table at the third position with two wins and as many losses losses, while a lacklustre Sri Lanka stayed just above laggards Afghanistan with three losses.