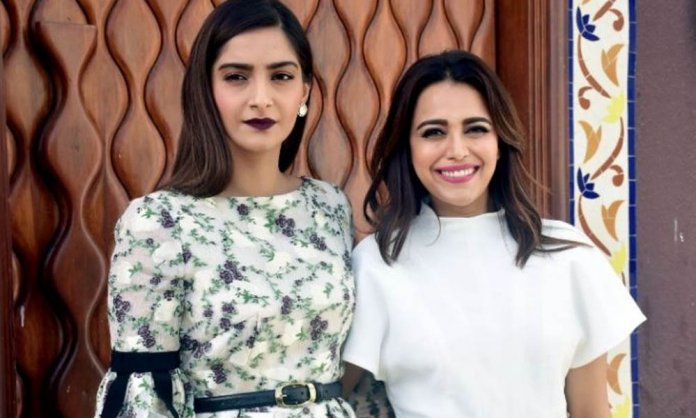 After several strong statements against Pakistan, Swara Bhaskar has been facing a ton of backlash on social media.

The “Veere Di Wedding” actress has been questioned by several prominent Pakistani celebrities for her double standards.

And now, all that “hate” seems to have troubled her best friend and co-star, Sonam Kapoor who has finally spoken up in support of the starlet.

Apparently, Sonam felt the need to rescue her bestie during a screening in New Delhi for their film, ‘Veere Di Wedding’ that was released over the weekend.

According to Sonam, the reason behind her best friend and co-star getting trolled on social media is a sign of just “how much they love Swara”

Speaking to the media, she stated:

I think people just like to troll her because she has an opinion and a point of view and I guess that shows how much they love her because the other side of hate is always love, so Swara you have a lot of lovers!

I think people just like to troll her because she has an opinion & a point of view & I guess that shows how much they love her because the other side of hate is always love, so Swara you have a lot of lovers!: Sonam Kapoor on co-actor Swara Bhaskar being trolled on social media pic.twitter.com/cqKN4J1VPr

However, it seems that the “Raanjhana” actress’s statement has been misquoted!

Apparently, the newlywed had been talking about Swara’s controversial scene in ‘Veere Di Wedding’ and NOT her anti-Pakistan statements.

Clarifying her stance on her Twitter, Sonam shared a screenshot from a Pakistani publication and cleared up the misunderstanding.

My defence of her has nothing to do with her comments on Pakistan! Get your fact right and stop trying to spread mischief and hate!

My defence of her has nothing to do with her comments on Pakistan! Get your fact right and stop trying to spread mischief and hate! ❤️✌️ #aproudworldcitizen #feminist #liberal https://t.co/QlakSjBT5c

The two actresses, apart from being the best of friends have worked together in several films, including ‘Raanjhanaa’ and ‘Prem Ratan Dhan Payo’.

During one of her promotional interviews for the movie ‘Veere Di Wedding’, Swara was heard making several controversial comments about Pakistan calling it a “failing state governed by Shariah Law’.

Apparently, the lady was so irked by the ban placed on her film in Pakistan, that she failed to realize just how controversial her comments were nor the feelings for her fans in the country.

This is what she had to say:

They’re (Pakistan) a non-secular state. I’m not surprised at all. Why should we hold up Pakistan, which is a failing state – I don’t understand why we keep taking pleasure and feeling a sense of self-worth from all the silly things that happen in Pakistan.

With such a bold statement, it was only a matter of time before someone felt the need to shut down the actress and call her out for her hypocrisy and ignorance and Urwa Hocane stepped up to do the honors!

Pakistan is the country that you @ReallySwara referred to,in 2015, as the “Best country you have ever visited” and it has only gotten better in the last few years in every aspect along with when it comes to having bigger hearts and welcoming our guests . 1/3

2/3 While you’re on this spree of empowering women,i must say you’ve become a bitter person. And all of this is odd coming from a citizen of a state that bans their own films i.e. #Padmavat so let’s not talk about women empowerment.

3/3 This only reflects on u as an ignorant person who is also quiet contradictory in her own statements. It’s not a failing state for sure but u come across as a “Failing Human Being” !!! @ReallySwara

From the citizen of the Phenomenal Pakistan 🇵🇰

Following her lead, others were seen slamming Swara, including Gohar Rasheed.

In your interview you said “#Pakistan is a failing state, I don’t understand why we keep taking pleasure and feeling sense of self worth from all the things that happens in #Pakistan”.  Let me inform you that #Pakistan is the 5th largest market for Bollywood films, (4/10)

Mehwish Hayat too had a few words to say on the matter:

The comments made by @ReallySwara & Kangana Ranaut earlier just go to prove the point that I have been https://t.co/8RoaMTehPK cannot ignore 70 years of history & when the chips are down their nationalism will always come up trumps.The fault lies with us who see their indust..1/2

Industry as the height of achievement &remain so much in awe.We don’t need their validation,we know what we’re capable of.We should be proud that we’ve come so far in such a short period of time with little or no resources.Friendship yes,but not at the cost of our self respect2/2

What did you think about Sonam’s statement? Let us know in the comments below.

Yet Another Video of Swara Bhaskar Bashing Pakistan Surfaces!