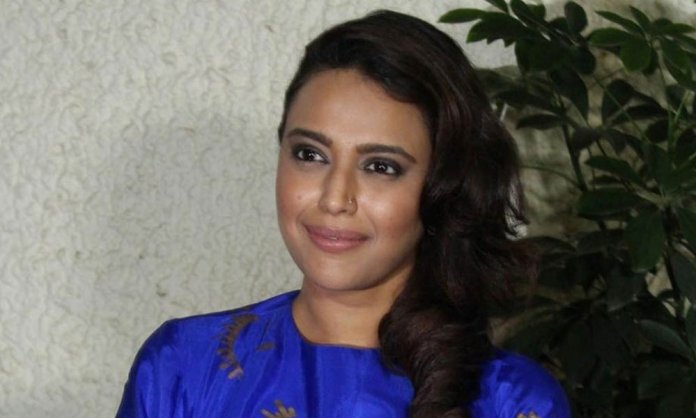 A few days back, Swara Bhaskar was practically a nobody in Pakistan. But she certainly has made her presence felt on social media by making several bold statements against our nation.

While the “Veere Di Wedding” lady might have gained some publicity with her anti-Pakistan remarks, she is now facing severe backlash not just from Pakistan but from India as well!

Swara Bhasker Hits Back At Backlash from Pakistani Celebrities!

In an old interview of the starlet, Sawara was spotted praising Lahore and how much she had enjoyed her visit to the City of Gardens.

Of course, her complete turn-around during her latest interview for the promotion of ‘Veere Di Wedding’ was a MAJOR shocker.

#Repost @doctorblogger (@get_repost) ・・・ Un FOLLOW her. ❌ 🚫 Thank you so much #swarabhaskar for letting us know this. You are calling our pakistan A failing state ?? Such double standard you got girl you just need to check first what you want to say. Sometime back you in our pakistani television show you were telling about love you have recieved for 'Us'. You should be ashamed Ms. Swara. You were not known by many. And just because of your little fame you show your 'Asliyaat'. #veerediwedding #vdw #rheakapoor #sonamkapoor #sawarabhaskar #swarabhaskar #kareenakapoor #kareenakapoorkhan ✔️ 🍃@sonamkapoor @reallyswara @vdwthefilm @rheakapoor #anandahuja @anandahuja #doctorblogger #diaryofanintrovert_

Not only did she call Pakistan a “failed state” but also stated that Pakistanis have the worst vocabulary!

However, it seems that this is not the first time the actress has made statements against our country.

In fact, a video dated to 2016, just resurfaced on social media and we couldn’t help but share it with you!

This video came at the time of the Uri Attacks which deteriorated the relationship between the two neighboring countries. The worsening political situation in the two countries eventually led to India placing a ban on Pakistani artists.

In a contradictory statement, Swara goes on to describe Pakistan as a “failed state” having “no law and order” and where its citizens are being “killed in bomb blasts” every day!

She also mentioned the murder of Amjad Sabri and how his killer is still roaming free.

Well! It’s no surprise that Swara has been in the “hot seat” for all her comments – after all, any Pakistani would be outraged over such comments!

What are your views on the statements by Swara? Let us know in the comments below.