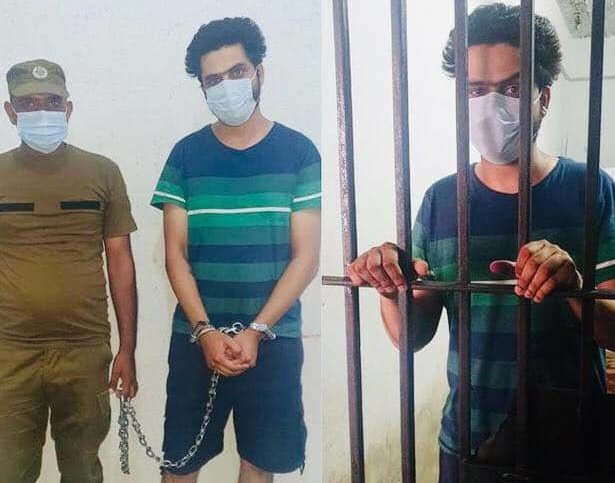 You might have come across an alarming video that has been going viral for a couple of days now.

Unlike other viral content, which is usually hilarious or something very remarkable, this video will shake your core and leave you devastated.

The video is of Arsalan Meer, a son, brother, and a husband who raised his hands on not only his sister but also the woman who brought him into this world. Yes, his mother.

Arsalan was caught on camera, mercilessly beating the poor woman who is seen lying on the ground, trying to defend herself against this excuse for a man.

Social media was furious; the community tagged everyone they possibly thought could help from Punjab Police to the SHO, every possible link.

Their work paid off as the son who dared to beat his mother over property is now behind bars.

Arsalan, the animal who was beating his mother in a video has been arrested. Keep this monster behind the bars for the rest of his life and make an example for others not to even think about raising their hand on their parents.@PunjabPoliceCPO #SpeakForDomesticViolence pic.twitter.com/v4agcEJDxL

It is also important to mention here that his wife has rolled out a video in which she states that he was only hitting her in ‘self-defense.’

While social media is having a field trip that this barbaric man has been locked, it is crucial for us also to realize that this event should not have happened in the first place.

A mother’s position, even in our religion, has been mentioned time and time again. The reference that ‘Jannah’ or the gateway to heaven lies below her feet in itself is a beautiful description of the value of a mother.

Unfortunately, we forget everything and let a greedy monster take over us just for a few pages of paper. One can only imagine the happiness Arsalan Meer’s mother had when he was born to her after all the pain and hardship. Only to have committed this sin and tear down all the years of love and sacrifices she must have put in raising him.

Finally he caught to imprison. He doesn't only deserve to stay behind bars of Jail but he should be treated as bad as he did to his mother. #ArsalanMeer #zoobiaameer #justiceformother #SpeakForDomesticViolence pic.twitter.com/yaNKj5uLkU

#ArsalanMeer who beat his mother for property has been arrested. Hope there will be no more people like Arsalan in our world.#zoobiaameer #میری_ماں_میری_جنت pic.twitter.com/8IgVhwd7Ts

You beat your mother just for the property papers.. Disgusting
Treat your Mother with Respect and your children will do the same for you.. But I think, he forget about the "Makafat e Amal"
He ruin his Duniya and Akhirah#zoobiameer #justice #justiceforzoobiameer

Mothers are the Heartbeat in the Home and without them, there seems to be no Heartthrob ❤ pic.twitter.com/NH3FEv50AE

#zoobiameer
In our Society Everyday in the name of Honor, Harrasement, Rape Abused, Money and Property Woman Are Oppressed. Doesn't anyone know what's the status of a woman in Islam as a mother, sister and daughter? This is Islamic Republic of Pakistan? Where Are We Going? pic.twitter.com/0s556Lh8o7

The animal 😡😡 , Arslan, who was beating and slapping his own mother in the video which went viral yesterday has been arrested!

Had it not been for Youtube where the video was originally uploaded this would never have happened!#ZoobiaMeer #kanjaraulaad 😡😡 pic.twitter.com/pcFFxUE0k5

While many social media users have demanded, he is kept in prison for life to male an example, some demand that he should be shot in public. Once again, the problem needs to be tackled with ‘how to prevent this act from happening in the first place.’

A mother and a child’s bond is the most honest relationship in this world. It is pure; it is beautiful. She will sacrifice anything for her baby; she will give up her career, her freedom, her sleep, her food, herself in this selfless act of love, only to get this in return?

We, as a society, are responsible for shaping young men as well as young women. It is our responsibility to teach them what status parents have in ‘deen and Duniya.’ It is our duty to stop all the Arsalan Meers out there who have ruined lives and families of countless others.

Remember, “It takes a village to raise a child.”