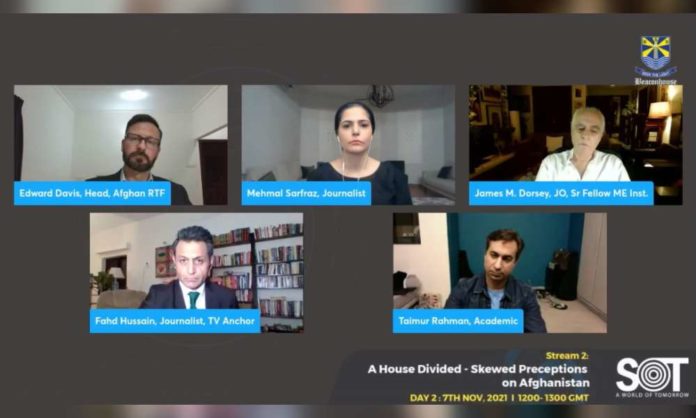 Obama, Trump, and Biden, all three great American leaders had one objective in common – to end America’s longest war and exit the US troops from Afghanistan. The war in Afghanistan against the Taliban was triggered after the unfortunate 2001 attacks in New York City, and it met its abrupt end when the US military abandoned its strongholds and left the country this year, leaving behind an undefined future for the Afghans.

The Skewed Perception on Afghanistan and the worries of the world leaders about the region’s security became a topic of debate at the virtual School of Tomorrow Conference organized by Beaconhouse. The panel discussion was chaired by esteemed members, including James M. Dorsey, journalist and Senior Fellow at the National University of Singapore’s Middle East Institute, Dr. Taimur Rahman, political activist and Assistant Professor at Lahore University of Management Sciences, Edward Davis, Head of Afghanistan Reconstruction Trust Fund (FCDO), and senior Pakistani journalist and TV anchor, Fahd Hussain.

James M. Dorsey was of the view that the change in power in the country has given birth to numerous questions, including how the new regime of Taliban plans to function and collaborate with its neighbors and the world leaders. He further expressed his concerns on the impending security issues as to how will the new establishment counter the rebels and deal with external forces like the U.S.A.

Edward Davis, who has been actively observing the on-ground situation in Afghanistan, stated, “What concerns us more is the present situation. Afghanistan has always been an economically weak state, the people are living a hand-to-mouth life. The past 20 years saw reforms, such as the inclusion of the female workforce in leadership roles, as there were 28 to 30 percent reserved positions for female parliamentarians and education for all. Since the Taliban took over, these changes have been reversed. There is also the rising issue of food shortage as the nation is facing a severe drought. The Taliban, however, have allowed the NGOs to function as per norm, which is surprising and creates hope that the extremist regime might show some signs of relaxation in the future.”

Afghanistan has seen modern warfare from the front row, and is still dealing with the aftermath of the 20 years of occupation by the U.S. forces. The country saw an investment of US $2 trillion, in the form of military equipment and other commodities, while 2300 U.S. soldiers lost their lives, along with countless civilians while millions of Afghans became subject to displacement, inflation, unemployment and drought. “The country is faced with international pressure and isolation, with only a few eager to help them on humanitarian grounds,” said Dr. Taimur Rehman during the virtual conference. He further emphasized on the fact that since Taliban have risen to power in Afghanistan, its eastern neighbor Pakistan has experienced a rise in terrorist activities allegedly from the Tehreek e Taliban Pakistan (TTP). Although the Afghan leaders have assured support to Pakistan in this issue, the rising tension with the Shia community in the state can see an aggressive involvement from Iran as well.

Fahad Hussain, while expressing his views on the situation stressed the greater issue, that is the reintegration of Afghanistan into the global landscape, as according to the United Nations, the Taliban-run state is about to face a great humanitarian disaster in the coming winters in the form of shortage of food and resources. A handful of nations have shown willingness to provide whatever possible aid to the people of Afghanistan.

While to attain global attention, the Taliban will need to work on their international and national policies, which till now has been missing from the big picture. The impending disaster may worsen the law and order situation in the region, directly affecting Pakistan, with a larger influx of refugees and an increase in violence due to clashes between the now governing body and militant groups.

It is evident that Afghan leaders must take strong and immediate actions to provide maximum relief and a way forward for their people because the outlook of the new regime so far has not been positive.