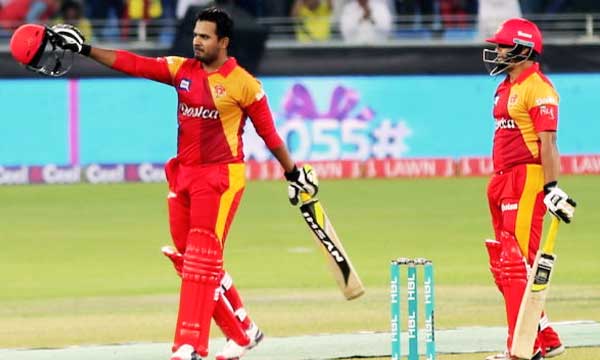 The left-handed batsman Sharjeel Khan, representing Islamabad United in Pakistan Super League (PSL) 2016, is expected to be included in Pakistani squad for forthcoming World T20 2016 after playing a tremendous innings in the 3rd playoff yesterday, against Peshawar Zalmi.

Pakistan Cricket Board (PCB) had announced a 15-member squad previously for the grand event, but the board can alter the squad before March 8th, the official start to the World T20 campaign.

As told by cricket experts, PCB was most likely to substitute the test opener Khurram Manzoor with Sharjeel Khan following the latter’s incredible innings of a total of 117 runs at Pakistan Super League (PSL) 2016. Manzoor’s selection in the T20 team had come as a shock to many and the cricket board received a lot of criticism when his addition in the team was announced.

Sharjeel Khan and Mohammad Sami have also been selected to play in Asia Cup Twenty20, according to ARY News. Sami and Sharjeel will be replacing Ruman Raees and Babar Azam in the Asia Cup tournament. These decisions were undertaken by the PCB merely based on the outstanding performance of the two players in the PSL 2016.

Sharjeel Khan had scored the first ever century in the PSL 2016 on Sunday evening, against Peshawar Zalmi; he scored 287 runs in the overall cricket league. On the other hand, Sami took eleven wickets in the PSL tournament until now, with figures of 5/8. Shahid Afridi had previously implied that the Pakistan T20 team might be modified; hence, the five wickets by Mohammad Sami against the Karachi Kings, and Sharjeel Khan slamming 8 sixes and 12 fours scoring 117 runs against Peshawar Zalmi, made the PCB selectors re consider their decision, leading them to make a few quick changes in the final squad.