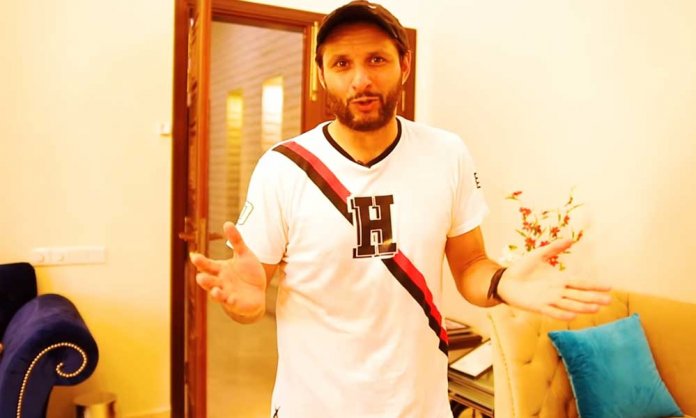 Former Pakistani cricketer Shahid Afridi recently gave his fans a tour of his beautiful residence and shared memories from his great cricketing career.

Afridi’s house looks nothing less than a five-star hotel that is fully equipped with modern conveniences. The video went viral and gained great popularity.

In the tour of the house, the cricketer also showed jerseys gifted to him by various players which also included Virat Kohli’s from the 2016 T20 World Cup with the signatures of all the Indian players in the team.

He recalled an event that came ahead of his first innings in international cricket.

In his debut match, he didn’t get the chance to bat against Kenya in a Sameera Cup 1996-97, but in the next match he was gifted with an opportunity to bat at number three position and in that made Afridi broke the record of fastest century in ODI.

Umar Akmal Smashes Shahid Afridi’s ‘Most Ducks by Any Pakistani in T20’ Record!

The bat he used during that match was gifted to him by Indian legend Sachin Tendulkar which he calls one of the most memorable gifts that he has ever received.

Other than the cricket collectables from his career, he owns a pool and a table tennis table in a separate area to chill when his friends.

The family man also has a garden with a 22-yard pitch where his kids play with him.

What do you think about Afridi’s beautiful house? Comment and let us know.