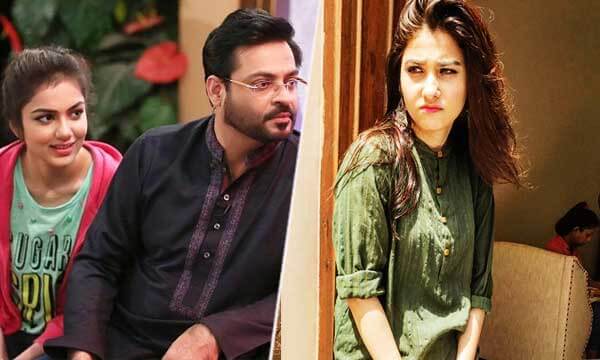 Sanam Baloch’s morning show with Aamir Liaquat and his second wife, Syeda Tuba Aamir has created quite an uproar on social media.

During their tete a tete with Sanam, the newly-weds revealed a lot of about their life together, before and after marriage.

However, the show has created a massive uproar on the internet. While mostly, it’s Aamir Liaquat who faces wrath for his controversial statements, this time it’s Sanam Baloch who has found herself in the eye of a social media storm.

And now rising drama actress Hina Altaf too has given her two cents on the matter!

For the love of white … Always ❄️ #lahorediaries

During the morning show, Baloch asked Aamir Liaquat about his first wife Bushra and her disapproval over her husband’s second marriage.

Apparently, fans are outraged that the host criticized Bushra Aamir Liaquat for not accepting the news and blamed her for being against the marriage.

Watch the video for yourself here!

Meanwhile, Aamir Liaquat added that his wife lacked knowledge of religion regarding the matter of second marriage. What’s more, he even took a dig at her, stating that his children are not posting things on Twitter on their own.

Post the morning show, viewers were revolted over how things escalated in the episode.

I can't even. Saw a clip of Aamir Liaquat and his wife on Sanam Baloch's show. Pathetic

Im so disappointed in Sanam Baloch for talking about Aamir Liaquat’s first wife..call him and his wife on the show..thats fine but she could’ve avoided defaming his first wife when she knows NOTHING about the situation..These morning shows are hitting new lows everyday 🤧

such a disappointment to see #sanambaloch talking about #amirliaquat second marriage – where he openly humiliates his first wife, takes pride in doing kifalat for his family & blaming tarbyat? is there any level to which these morning show hosts can go to for TRP?

Hina Altaf too came across the controversy and took to Instagram to give her view on the matter.

According to the starlet, with so many issues to resolve in Pakistan, Aamir Liaquat’s second marriage should be the last of everybody’s discussion. 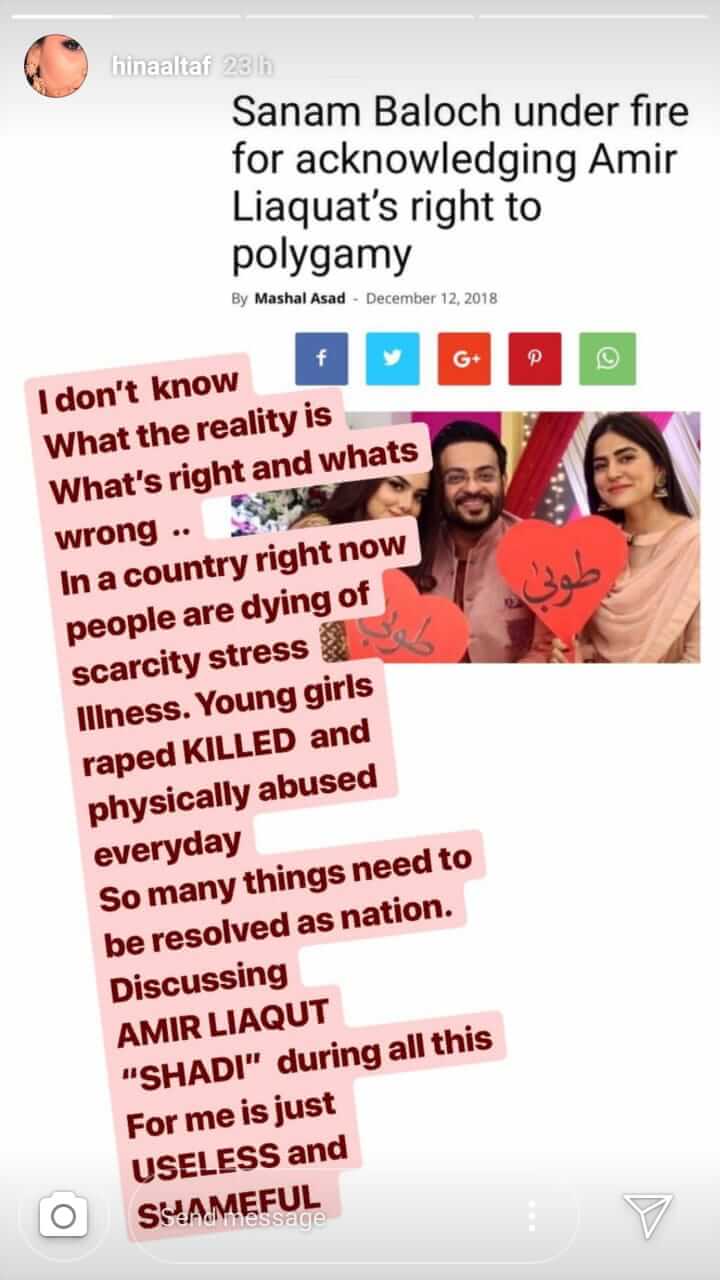 Meanwhile, Aamir Liaquat’s daughter, Dua Aamir took to Twitter and posted that her mother has been a blessing to her in this tough time

Thank you God for blessing me with an amazing Mom, brother, and supportive friends Alhamdulillah💜 People who stick with you through tough times are those who matter the most.

In a series of tweets, she applauded her mother, Bushra for being a strong woman and raising her children well.

Highly agree💖 Whenever someone comments on mine and bhayya’s well mannered and kind personality, i owe it all to mama. Shes the only one who brought us up so well💕 https://t.co/SOFj4fxwqa

She also condemned people who break homes in a cryptic tweet.

May He bless all those who build love in homes, not break them💕 https://t.co/gMzS2yo12E

On the other hand, Bushra Aamir Liaquat is telling her fans that she is strong women and will battle her way out of the ordeal.

She continues to share empowering quotes on Twitter by stating how important is to be patient in trails of life.

Komal Aziz Got Supsended from IBA & The Reason Will Surprise You!

What do you think about Sanam Baloch’s show with Aamir Liaquat? Let us know in the comments below.