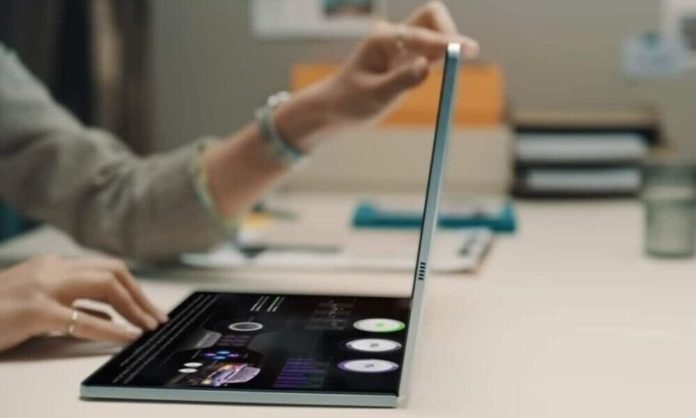 Samsung is all set to add another major product to its portfolio. The recent highly anticipated addition will be a foldable laptop with the biggest screen released to date. According to the Korean media, the laptop will measure 17.3 inches which is the largest screen size released by any laptop brand as of now. The product which was initially set to launch in 2022 is now pushed back with a tentative release date in 2023.

The world’s largest OLED panel producer is known for providing OLED screens to some of the top companies in the world. While sharing the details about the laptop specs, the Korean media announced that Samsung’s latest offering would come in a 17.3-inch panel produced by Samsung Display. Meanwhile, the upper part of the screen will measure 13.3 inches. The release will also coincide with the Hp who is set to release a foldable laptop featuring a 17-inch screen with a foldable LG display. In its initial phase, Samsung was supposed to roll out 6000 units. However, the latest news suggests that the volume will more likely increase to 8500 units.

Read More: How To Buy the Right Smartwatch for Yourself

Samsung vs Hp vs Asus

While Hp is set to roll out its version of a foldable laptop, Samsung’s other rival Asus already has a foldable product in the market. The newly released Asus ZenBook 17 Fold offers a display of the 17-inch screen supplied by BOE and is considered a niche device. The laptop offers the second largest diagonal, as it has a 12.6-inch display when closed. According to the latest reports, Asus has ordered 10,000 such panels to BOE, and ditto for HP’s order to LG. From the price point, Asus is pretty much relevant in the market. While the Asus laptop costs US$3500, the Samsung is expected to be priced at the same value.

With the rising demand for Asus OLED laptop display orders by Asus, it is highly likely that Samsung’s projections of 8.5 million such panels for 2023, surpass this year’s target of about 6 million for this year. Meanwhile, the Samsung screen is also reported to be used for the first portable PC with a flexible screen from Samsung Electronics, which could also be launched in 2023.

Another foldable laptop on the market is offered by ThinkPad – X1 Fold Gen 2, which is the best-selling model in the category until now. The laptop offers a 16.3-inch OLED display inches Folds down 12 inches when closed.

Whether Samsung will be able to keep up with the demand and roll out a product that will attract the consumer base is still debatable. However, given that the majority of the products offered by Samsung are already doing great on the market, it is highly likely that the foldable laptop will get the recognition it has always received.

Stay tuned to brandsynario for the latest news and updates.