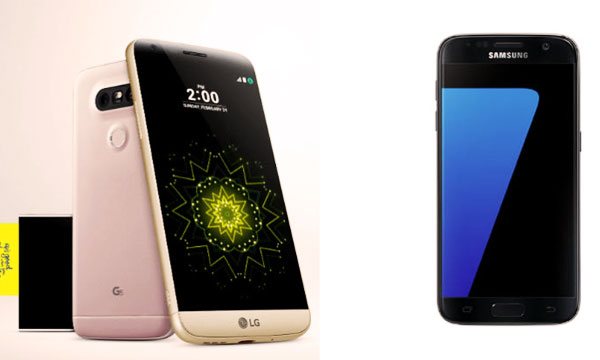 Samsung Galaxy S7 vs LG G5 has started a war between fans and android lovers. Two of the most powerful android devices unveiled at The Mobile World Conference are going to war. So which is the better phone? Let’s pit them against each other and see who emerges victorious.

Samsung has played it safe by opting a metallic and glass body for the S7 just like the S6. The build looks sturdy and premium. The fingerprint sensors and side button/rocker remain where they were in in the S6. The camera lens, however, has been pushed inside a bit so it’s not protruding out much from the back.

On the other hand, LG has surprised everyone with an innovative modular body for the G5 which is sure to turn heads. The build is full metal unibody with a detachable base for removing the battery or attaching new accessories to the phone called ‘Friends’.

The volume controls have been moved to the side yet the fingerprint sensor remains at the back just below the camera array. It all comes down to personal preference for design.

Samsung S7 rocks a beautiful 5.1 inch Quad HD Super AMOLED display. The display has a 2560×1440 resolution with 577ppi. S7 has the ‘Always On’ feature which displays an image, calendar or time and date even when the phone is asleep. The display is protected by Corning Gorilla Glass.

LG G5 boasts a slightly bigger 5.3 Inch Quad HD IPS LCD display. The display resolution is set at 2560×1440 with 554 ppi. G5 also has the ‘Always On’ display like S7 with the same functionality and Corning Gorilla Glass for protection.

No clear winner can emerge in the display section as S7 might have a slightly higher ppi count for delivering sharpness but the G5’s IPS LCD ensures sharper image than an AMOLED display. Samsung S7 comes with the Quad Core Snapdragon 820 processor or the Octa-Core Exynos 8890. We will be using the Snapdragon one for comparison. So both phones G5 & S7 sport the same powerful processor as well as 4 GB of RAM. Benchmarks will prove which is better.

Both phones have expandable microSD Storage. G5 only offers a 32GB internal storage while S7 offers 32GB or 64GB. The difference is the expansion limit. G5 lets you expand the memory up to a whopping 2TB while S7 restricts at 200 GB.

S7 comes with a 12 MP camera, unlike S6’s 16 MP. But Samsung has fitted the S7 with a powerful f/1.7 lens which results in better low light photography than other phones. The selfie camera of S7 also provides amazing selfies due to its 5 MP camera also fitted with a f/1.7 lens. The dual pixel tech used in S7 allows it to focus faster than any other phone as reported. The LG G5 again astonishes with 2 cameras at the back of the phone. The primary camera is a 16 MP and will be used for capturing regular pics. The secondary is surprisingly an 8 MP one with 135-degree wide-angle sensor. The field of view this camera provides is an angle closer to the human eye than a regular camera. The front camera for the G5 boasts 8 MP for clear crisp selfies.

So your choice depends on what you are going for.