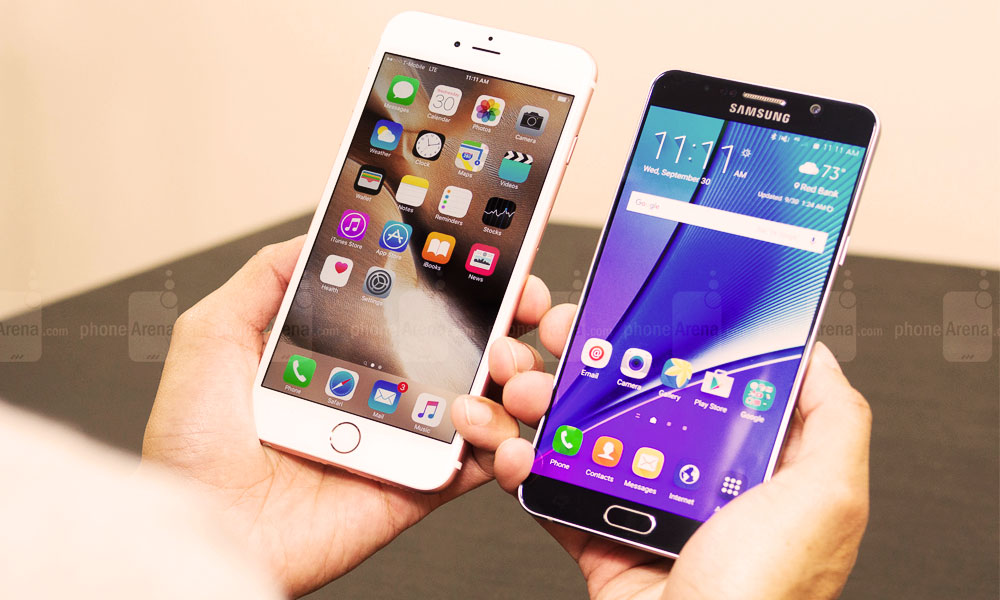 Samsung Galaxy S7 vs iPhone 6s Plus. The war is on. As soon as Samsung unveiled its newest flagship, the phone was pitted against its traditional competitor Apple’s flagship.

So which phone is better you ask? Let’s review and find out.

The S7’s metallic and Corning Gorilla Glass finish gives off a premium feel while iPhone 6s Plus boasts an elegant aluminum frame. The size advantage; however, tips in S7’s favor.

The noticeably less bulky S7 with the 5.1-inch screen is easy to handle than the 5.5 inch iPhone 6s Plus. The S7 however, attracts finger print smudges on the back while iPhone 6s Plus stays clear of it.

It all comes down to personal preference of the consumer for size and finish.

S7’s ‘Always On’ display has an image, calendar or time and the date on the screen as it saves battery without needing the phone to be woken up. The iPhone’s 3D Touch recognizes touch pressure and customizes your experience accordingly. Both Phones have strengthened glass displays to protect from damage.

So a clear winner but with only a slight margin is the S7 in the display department.

Samsung has powered its flagship with two choices of processors. The Quad Core Snapdragon 820 processor will be available in devices in the US while the homegrown Samsung powerhouse of Octa-Core Exynos 8890 will power the S7 outside the US.

In comparison, iPhone 6s Plus is powered by a 64-Bit Dual Core A9 Chipset. On paper, the dual-core A9 might look tiny but it has proven to be a powerful and efficient one.

Samsung dropped the megapixel count on the S7 to 12 Mega Pixel from S6’s 16 Mega Pixel. But this doesn’t matter as the S7 has been fitted with a powerful f/1.7 lens which means better low light photography than any other phone. The front camera of the S7 is also a f/1.7 lens with 5MP for amazing selfies.

Also, S7 comes with the innovative phase detection autofocus which can focus two times faster than the iPhone 6s Plus as reviews tell. iPhone 6s Plus also rocks a 12 MP camera but with a less powerful f/2.2 lens. Phase detection autofocus is also present on the 6s Plus yet it’s not as snappier as the S7’s.

So the winner in means of specs is S7. But we shall wait and see because S7’s true rival, the iPhone 7 will be revealed six months down the road.