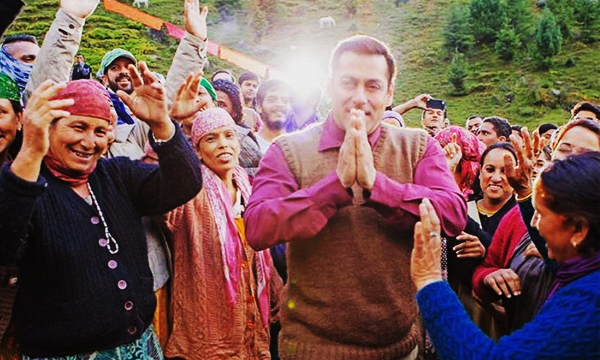 The released date of Salman Khan’s upcoming Bollywood movie is out and it seems like the Sultan of Bollywood is all set to make another big Eid released. Tubelight is slated to release on Eid 2017.

Salman Khan has begun the shooting of his upcoming Kabir Khan movie “Tubelight”. But his latest venture will be even more different than his earlier hits.

You need to see this video of the star grooving to a song in the movie.

After wrapping up the first schedule of Kabir Khan’s Tubelight movie in Ladakh, Salman Khan is now busy with Tubelight shooting in Manali- the pictures reflect Salman Khan’s look in the movie. The 50-year-old actor can be seen donning formal shirts, half sweater, and trouser- trying to pull off a common man’s avatar.

The look quite like the one he has already donned in his previous movies, Sultan and Bajrangi Bhaijan.

Tubelight is a forthcoming historical drama flick based on 1962 Sino-Indian.

The first look of his movie has been revealed and it seems like Salman Khan is to play a soldier in the movie.

Salman Khan has begun the shooting of his upcoming Kabir Khan movie “Tubelight”. But his latest venture will be even more different than his earlier hits.  The first look of his movie has been revealed and it seems like Salman Khan is to play a soldier in the movie.

The movie has been shot in the scenic location of Ladakh and Leh. The first look of the movie, that shows Salman dressed as a soldier, was shared by Kabir Khan on his Instagram recently. Have a look!

Happy Independence Day from the team of #tubelight #Ladakh

The actor dons a rugged avatar, with a gun hanging from his shoulder and a rack sack.

The buzz was that Khan has roped in the Chinese actress Zhu Zhu for the leading role in the movie.

We wrapped a day before schedule. So today all of us went biking and had lunch next to a river #Tubelight pic.twitter.com/48EWVOWNT0

While it has been kind of shocking that no Bollywood actress was chosen for the role, the chinse star seemed fit for the female actress beside Salman Khan in Tubelight and was selected by Kabir Khan for the coveted role.

For those who don’t know, Zhu Zhu  boasts a filmography that includes Hollywood movies like Shanghai Calling and The Man with the Iron Fists.

Will she be able to compete with the likes of Bollywood divas like Deepika Padukone, Sonakshi Sinha or Anushka Sharma? Let’s wait and watch as she works her magic alongside Salman Khan!

Whenever superstar Salman Khan and ace director Kabir Khan team up, they always give us a major hit. The Ek Tha Tiger and Bajrangi Bhaijan duo is ready to work on another movie titled ‘Tube Light’.

While talking about his next project with Salman Khan, the director revealed that the film is going to be a mix of comedy, a little bit of drama and politics. While talking to NDTV he stated that:

“It is about a personal issue. Can’t talk about what exactly right now. Needless to say my films always have a political backdrop to them because that’s what excites me and I find real. So Tube Light also has a little political backdrop.” He further added that the new movie will reflect the same emotions as Bajrangi Bhaijan did but with a completely different story line. With this new project, both Salman and Kabir Khan will work on exploring a perfect balance of emotional and humour.

The movie will primarily be based on Salman Khan’s journey of enlightenment, where he would be travelling from India to China. According to Kabir Khan, there will also be a Chinese element in the story (are we going to see some Chinese actress opposite Salman?) Let’s wait and find out.

Kabir also updated his fans and followers how he has been hunting for a perfect location to commence the movie’s shooting with Salman Khan through his Twitter account.

The hunt for locations begins 😊 pic.twitter.com/qqVcJKcyqp

It has been revealed that the film will be shot in the Indian-administered region of Jammu and Kashmir, Ladakh and will be ready to hit theatres by Eid next year.