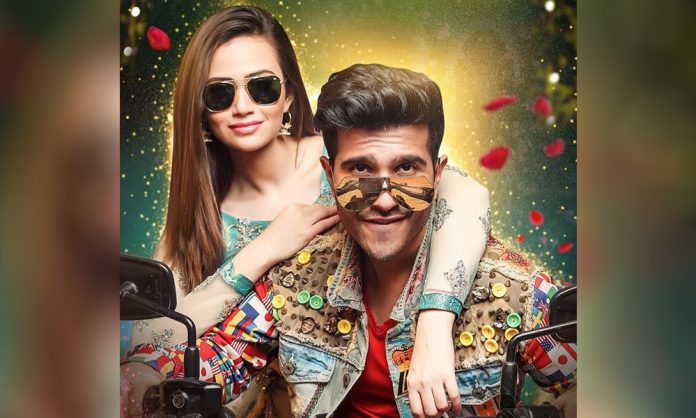 After Suno Chanda, Feroze Khan and Sana Javed are back with a bang on our screens with a hilarious, new comedy ‘Romeo Weds Heer’ on Geo Entertainment.

Their sizzling chemistry in the super hit drama ‘Khaani’ wowed us all. The pair also starred in an Eid telefilm ‘Dino Ki Dulhaniya’. And now we will be seeing them for the third time in the rom-com, playing the titular characters.

The drama is helmed by Anjum Shahzad, written by Dr. Muhammad Younis Butt and produced by Abdullah Kadwani and Asad Qureshi.

Romeo Weds Heer has rolled out its first teaser and it is giving us major desi vibes!

The OST and promo look straight out of a movie. The pair is killing it while dancing to upbeat track, sung by Aima Baig and Sahir Ali Bagga.

In an interview to Instep, Feroze stated:

“Romeo Weds Heer is going to be one of the best films to be watched on TV.”

Meanwhile, Sana Javed will be ditching her usual serious avatars and will be donning a character that is fun, bubbly, bold and flamboyant.

Complete cast has not been revealed yet.

A post shared by Bridal Fashion (@pakistanidramastrending) on Sep 7, 2018 at 9:55pm PDT

A post shared by Bridal Fashion (@pakistanidramastrending) on Sep 7, 2018 at 9:55pm PDT