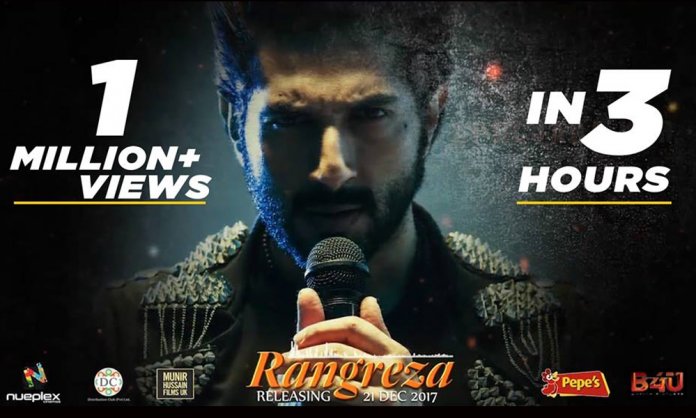 Rangreza’s title track is out and we can’t hold our excitement! Having crossed over 1 million views in just 3 hours of its release, it’s bound to be the chart topper this season.

Titled ‘Rangreza’ the song features the powerful vocals and music of J. Ali. The hard-hitting lyrics have been penned by the brilliant Azam Pasha while the melodious track has been composed by Mohsin Ali.

Listen to the Title Track Here!

The movie starring the dapper Bilal Ashraf, Gohar Rasheed, and the beautiful Urwa Hocane is a film based on music. Rangreza will explore the contrast between two popular genres of music, ‘classical qawwali’ and ‘pop music’.

It has been ages since we’ve had such soulful lyrics and powerful music in Pakistani films, Rangreza has raised the bar, the first track, ‘Phool Khiljayen’ put us in a trance of its own. Hats off to the queen of melody, Abida Parveen for the beautiful song.

Amidst this musical, we will also witness a love story like no other. The film will mark Aamir Mohiuddin’s directorial debut and we’re anticipating Rangreza to become the blockbuster of the year.

Rangreza is set to release on the 21st of December this winter and we can’t wait to watch it!