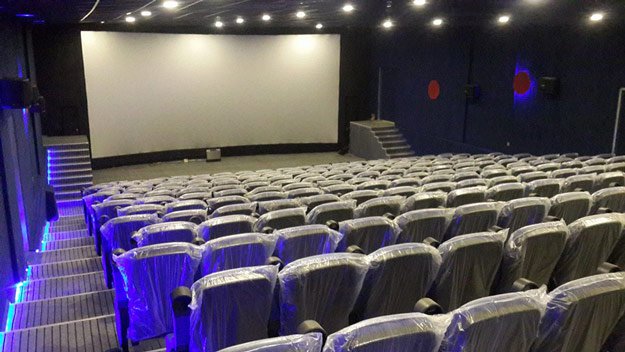 News of the first multiplex in Quetta, the Weplex Pak Force Cinema, received great positive feedback a few months ago; even though the official launch was said to be scheduled for March 4th,there have been multiple delays and now the cinema will finally open doors to the public on May 6th. The first film that the multiplex will screen is Ashir Azeem’s Maalik.

“If everything goes according to plan, the facility will become functional from May 6 and we will start by screening the film Maalik,” said the film distributor Jahanzaib Khan. The opening, however will be a soft opening and the multiplex will temporarily serve as a single-screen cinema, until the work on the other halls is finished.

“The 3D cinema [Weplex’s largest hall] will be the first to begin screening movies whereas work on the Gold cinema — which is more of a luxury cinema — is still underway. It will hopefully be nearing completion in the next few weeks,” stated Khan.

The first multiplex in Quetta ‘Weplex Pak Force Cinema’ will be officially launched on 4th March. Jahanzaib Khan, a film distributor is taking the lead on this PKR 100 million worth project.

Khan has taken this huge risk because he sees potential in it as he said, “Up until a few weeks ago, before Quetta Gladiators came into prominence, people considered the city as a backward area with just mountains. Well the truth is that life here has been moving on. Even the security situation is showing signs of improvement.” He further said it was quite a task to search for the right location.“The location is ideal and very secure, within the limits of Quetta cantonment.” The suburbs are densely populated equipped with a strict security detail.

He predicted his investment to bear fruits as their are not many other options for entertainment in the metropolis. “People in Quetta have been deprived of quality entertainment for so long. They have no place to visit for enjoyment,” he said.

With the launch only a few days away, people are already showing interest and frequenting the premises to have a look. “People are showing up in large numbers, asking about the facility and requesting tours … so much so that we had to seal the gates so that they don’t barge in.”

The 3D cinema hall can seat upto 300 people. The Gold Theater will be able to seat up to a 100 people.

The largst curved screen will be around 15 feet tall and 34 feet wide equipped with Dolby Digital Sound 7.1. “The record for the largest screen in Pakistan was previously held by The Arena, Lahore,” said Khan.

Khan also recalled being approached by filmmakers who want their films to be screened in the new multiplex. “A few days ago, I received a call from Jami who asked if we could show Moor at Weplex given its Quetta-centric story. Nabeel Qureshi and Humayun Saeed made similar offers with Na Maloom Afraad and Jawani Phir Nahi Ani,” reminisced Khan.