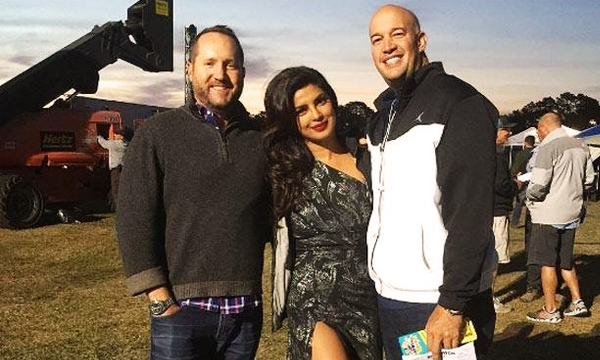 UPDATE: The multi-talented Priyanka Chopra recently wrapped up shooting for her upcoming Hollywood debut Baywatch. She has made a huge leap forward from Bollywood to American TV series Quantico to a Hollywood movie Baywatch. It turns out Priyanka’s Baywatch producer Beau Flynn is quite impressed with her acting skills.

It was an amazing experience to work with the gorgeous & fiercely talented @priyankachopra in her first major Hollywood film. Get ready world, she is coming! #Baywatch #ForceOfNature #May2017 @therock @sethnodrog @hhgarcia41 @bslater9 @maryrohlich

Flynn said, “it was an amazing experience to work with her and called Chopra a ‘fiercely talented’ actress.”

Bye bye Savannah. You were a wonderful host.. Mornings always arrive too hard! Another day another journey. #nomad #traveldiaries #chopraOut

Priyanka Chopra has wrapped up shooting for the upcoming Hollywood debut movie Baywatch; she actress played a villian and managed to scare even Dwayne ‘The Rock’ Johnson! Seems like she did a great job playing a negative role in the movie.

Dwayne posted a video on Instagram saying, “There’s only one woman in the world that can handle this kind of pressure, this kind of action.”

I told u to watch out @therock haha! That's how we roll at #baywatch .. This was too fun!

After wrapping up the movie, Priyanka shared a photograph on Instagram as well.

“And it’s a picture wrap on Baywatch... Such a beautiful epic team on an epic film,” Priyanka wrote on the image.

The former fashion icon gave credit to her co-stars Dwayne Johnson, Zac Efron and other cast and crew members of the movie.

And it's a picture wrap on #Baywatch .. Such a beautiful epic team on an epic film. @therock @zacefron @sethnodrog @bubbakrush @kellyrohrbach @ilfenator @thejonbass @alexannadaddario and the entire crew that worked endlessly to make this happen.. Lots of amazing hugs and love came my way.. Much love and gratitude right back.. C you soon!

“Lots of amazing hugs and love came my way… Much love and gratitude right back… See you soon,” she wrote.

After wrapping the popular season Quantico, the uber-gorgeous Priyanka Chopra is presently shooting for her Hollywood debut movie Baywatch featuring Dwayne Johnson. A candid picture of Priyanka with director Seth Gordon has been making rounds on social media.

A month ago, Priyanka Chopra’s first look as Victoria surfaced on the internet and fans could not stop drooling. The exotic beauty is to play the role of Victoria Leeds in the movie portraying a negative role. Dressed in a yellow dress with a deep neckline looking ultra chic and sultry.

The movie also stars Dwayne Johnson, Zac Efron, Alexandra Daddario, Kelly Rohrbach, Hannibal Buress and others.
Baywatch movie is all set to release on May 19th, 2017.

We finally got that much-coveted first look of Priyanka Chopra with the entire cast of Baywatch; this recent picture has been going viral on social media where Priyanka can be seen on the beach, all smiles and laughs with Zac Efron, Dwayne Johnson, Alexandre Daddarioa and other cast members.

EXCLUSIVE FIRST LOOK: Our entire #BAYWATCH squad. Are we bad ass? Yes. Do we save lives? All day. Are we a dysfunctional family? Epically. Do we have fun? F*CK YES. We work hard, we play hard. @thejonbass @alexannadaddario @kellyrohrbach @ilfenator @zacefron #BAYWATCH Get ready world… MAY 19, 2017. (and yes, I'm the king of the #FargoStrut.. squared circle historians know what that means.. #OurBelovedMemphisTerritory woo!)

As the sea breeze kisses my hair..We have a conversation..the kind only we can have.. #BAYWATCH Victoria is back! #savannah

Priyanka’s leap in Hollywood was announced by Johnson through his Instagram account and the video is going viral. He captioned it, “She’s one of the biggest stars in the world. Insanely talented, relentlessly smokin’ and extremely dangerous – perfect for #BAYWATCH. Welcome @PriyankaChopra to our bad ass and incredibly dysfunctional family. Cue RATED R slo-mo running on the beach. We start shooting next week. World.. #WelcomeToBaywatch.”

Watch the video clip below:

She's one of the biggest stars in the world. Insanely talented, relentlessly smokin' and extremely dangerous – perfect for #BAYWATCH. Welcome @PriyankaChopra to our bad ass and incredibly dysfunctional family. Cue RATED R slo-mo running on the beach. We start shooting next week. World.. #WelcomeToBaywatch 🇺🇸🌊🇮🇳👊🏾

Dwayne Johnson and Priyanka Chopra exchanged some interesting conversation at the sea. Johnson says that he has his hands full with the “beautiful Priyanka Chopra”.

She even took to Twitter to confirm her badass, villain avatar for the movie.

And it's time to tell u all officially!! #Baywatch it is @therock ! Being Bad is what I do… https://t.co/v8u0TtXUNK

Watch @TheRock welcome one of the biggest stars of the world @priyankachopra to #Baywatch https://t.co/wPCABO8koX pic.twitter.com/Jw4AWyfmqt

Priyanka Chopra’s winning streaks continue with the major announcement of her Hollywood debut. The Bollywood diva will be seen in the Baywatch movie alongside Hollywood’s A-listers, Dwayne Johnson and Zac Effron.

Chopra proved her mettle with ABC’s hit TV show Quantico, then went ahead and picked up a People’s Choice Award for the series. Now, she is all set to win Hollywood with the movie version of popular mid-90’s series, Baywatch. According to the rumor mills, the actress will play the villain’s role in the movie while the iconic CJ Parkers role made famous by Pamela Anderson will be played by Model Kelly Rohrbach who was signed last month to play Parker.

Priyanka Chopra to Star In A Pakistani Movie Soon?

According to the rumor mills, the actress will play the villain’s role in the movie while the iconic CJ Parkers role made famous by Pamela Anderson will be played by Model Kelly Rohrbach who was signed last month to play Parker.

The movie shall be directed by Seth Gordon and will be produced by Johnson along with his partner Dany Garcia through their Seven Bucks Productions banner.

Thank you so much @elleusa such a fun shoot and what August company! Love love love!

With PC’s to-die-for body and a killer attitude, we have no doubts that she will slay the Baywatch movie!