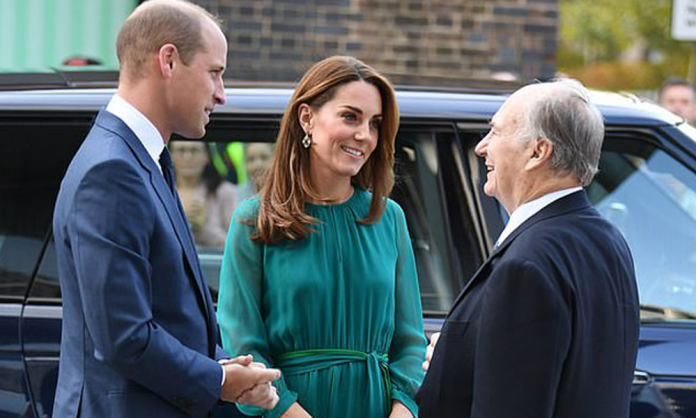 The Duke and Duchess of Cambridge Prince William and Kate Middleton are excited for their 4-day Royal Visit to Pakistan which begins today.

UK envoy Thomas Drew has said that the royal couple’s visit would showcase how Pakistan is “a forward looking country”.

“Most importantly, they hope to meet as many Pakistanis as possible during the course of the visit,” the British high commissioner said in a video message on Twitter. They are looking forward to building a lasting friendship with the people of Pakistan,” he added.

Drew went on to say as the royals are set to tour the country from today, October 14 to 18.

We’re in the final countdown to the arrival in Pakistan of the Duke and Duchess of Cambridge. Here is a flavour of what to expect. #RoyalVisitPakistan pic.twitter.com/zvg0MkTkNa

The couple recently met around 70 Pakistanis at an exclusive reception held by the Aga Khan Centre and hosted by His Highness the Aga Khan in association with Pakistan High Commission.

Pakistan’s High Commissioner to the UK Nafees Zakaria and the Aga Khan welcomed the royal couple when they arrived for the visit of the centre.

The Aga Khan, 82, hosted the Royal Couple to show them the contributions being made by Pakistanis to the cultural diversity of Britain.

During the reception, the Prince and his better-half got a chance to mingle with Pakistanis and earn more about the culture.

Furthermore, Saliha Mahmood told Geo News that the Duke and Duchess of Cambridge asked her about Pakistani food and sought tips on what to eat during the Royal visit which is expected from 14-18th October.

They asked me about Pakistani culture, they wanted to know about Pakistani food. They are very excited to visit Pakistan. I recommended that they should eat tradition food of Pakistan. I told them that don’t worry about putting on fats, you can exercise later on and burn the fats!

Writer and broadcaster Sarfraz Manzoor told that the Duke said he likes medium spice but “I don’t think it exists in Pakistan”.

PCB Chairman has Great Hopes for Cricket from the Royal Visit

The couple also told producer and composer Naughty Boy (Shahed Khan) that they are looking forward to the music on this trip as well.

While speaking to correspondents, the Duke shared that he is looking forward to this trip as he has heard many wonderful things about Pakistan.

They were eager to know more about my work for Pakistan and wanted to know in what ways I helped Pakistan’s economy. -Banker Arif M. Ali

The Royal Couple are very excited to visit Pakistan. I told them that the whole Pakistan awaits them with excitement. I think this will be a great visit. This visit will boost relations between the two countries and will project the real soft image of Pakistan before the world. The visit will draw attention of many people towards Pakistan.

On the other hand, a tweet from Kensington Palace, the official Twitter account of The Duke and Duchess of Cambridge and the Royal Foundation is winning hearts of Pakistanis world-wide!

The official handle tweeted about the Duke’s and Duchess’ visit at The Aga Khan Centre in Urdu!

Today The Duke and Duchess of Cambridge joined His Highness The Aga Khan for a special event at the Aga Khan Centre, ahead of their official visit to Pakistan later this month.

The Duke and Duchess of Cambridge met with Pakistani community leaders, business men and British musicians, artists and chefs at the Aga Khan Centre.

We look forward to hosting the Royal Couple and hope they get to enjoy the best music and cultural food Pakistan has to offer.

After Frogs, Grasshoppers have become the next Delicacy for Pakistanis!