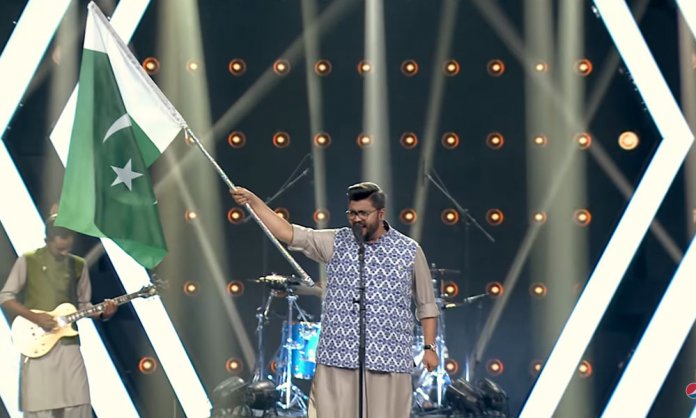 Can you feel it?  Ladies and gentlemen, there is a soaring amount of ‘jazba‘ and ‘junoon‘ in the air, as Pakistan and Pepsi Battle of the Bands Season 3 gears up for 71 years of independence!

To celebrate ‘Jashn-e-Azaadi’ in rocking style, the stage once again welcomed the super talented bands from the Pepsi BOB Season 2, Jasim and the Pindi Boys!

That’s not all, Pepsi BOB marked yet another historic moment in the episode. This is the first time that Season 2 and Season 3’s Top 4 have collaborated together!

Giving it everything they had, all paid tribute to Pakistan with an epic performance on ‘Tu Hai Kahan’.

21 the Band’s Version of ‘Hum Hai Pakistani’ will Steal Your Heart!

Making us teary-eyed, 21 the Band kick-started things off with a modified version of Vital Sign’s ‘Hum Hai Pakistani’, giving it their own unique spin-off.

Setting the mood with a Mehdi Hassan classic, Bayaan won over the judges in the third knock out round with ‘Yeh Watan’.

The charismatic performance started smoothly tugging heart strings and built up to a powerful, electric, and soul-packed anthem by the time they finished. Impressed ! Fawad Khan praised their effort and intelligence for improvising an iconic song which is fervently loved by Pakistan’s youth.

The Xarb boys took the evening forward with the Nayyara Noor classic, ‘Watan ki Mitti.’ Unfortunately for the boys, they were not  able to impress the judges this time around as the panel was skeptical about innovation from their end. However, overall they were not disappointed with their performance.

How could we ever leave our judges out of an Azaadi special? When asked about their favorite ‘mili-naagmay’, Meesha Shafi said our national anthem and ‘Dil Dil Pakistan’ are close to her heart. She was joined by the ever-green Fawad Khan who also voted for the national anthem.

Giving us major goosebumps, Bilal and Faisal also gave their outstanding input and Bilal even refreshed school memories by singing a couple of versus from ‘ ‘Ye Des Humara Hai’.

Tamaasha went all-out with yet another iconic tune, ‘Is Parcham Ke Saaye Talay,’ Unfortunately, this was the first time when the band did not get a standing ovation from of panel. However, the performance was well received.

Two of the Four Bands Found Themselves in the Danger Zone!

As the night came closer to the end, two of our Top 4 found themselves in the danger zone! It was Xarb and 21 the Band who had to fight for their survival to make it to the safe zone with Tamaasha and Bayaan.

Xarb performed first with 100% zeal and passion to ‘Sohni Darti’ while 21 the Band gave it all they had to amp-up their performance on ‘Jazba-e-Junoon.’ As the battle of survival came to an end, it was time for the judges to decide which band gets to stay and which goes back home.

Saved by the Panel!

The judges had a plan of their own, as the episode was an Independence Day special, they did not want to make anyone go home. They announced it as a no-elimination episode, giving a sign of relief to the bands.

However, things have just gotten a little more intense as the next episode will have not one but two eliminations!

We are very close to find out who will be the winner of Pepsi BOB Season 3! Watch the complete action below!