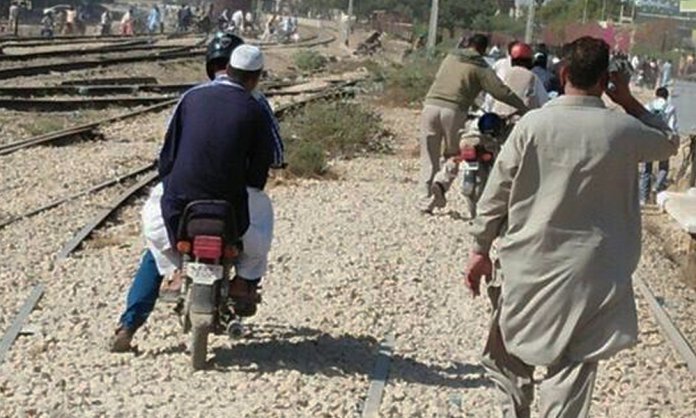 Karachi has always been facing trouble with bumpy and pothole-filled roads across the metropolis. The sad state of main roads has often caused major traffic jams all over the city.

Even though the main streets of Karachi have undergone drastic changes recently, there are some areas which are still neglected. These have caused major disruptions in traffic and is an inconvenience to people who have to pass through there every day.

The Road from Malir Halt, Star Gate, Natha Khan towards Drigh Road and Shahra-e-Faisal has Been Affected by Severe Traffic Jams.

Due to the ongoing development work, there has been a huge traffic jam from Star Gate towards Drig Road. Shockingly, having no choice people have now begun using the railway track as an alternative.

However, people fail to realize the dangers of using a railway track, not only is it hazardous to life but could lead to fatal accidents as well.

The following Pictures were uploaded on Facebook by concerned citizens.

As seen below, people have chosen to use the railway track as an alternative route in order to escape the bottleneck traffic below.

The ongoing work on the bridge at Drigh Road seems to be the reason for the heavy traffic on the main road, as a huge part has been blocked.

Traffic Jam at Drigh Road to Continue Till 3 Months