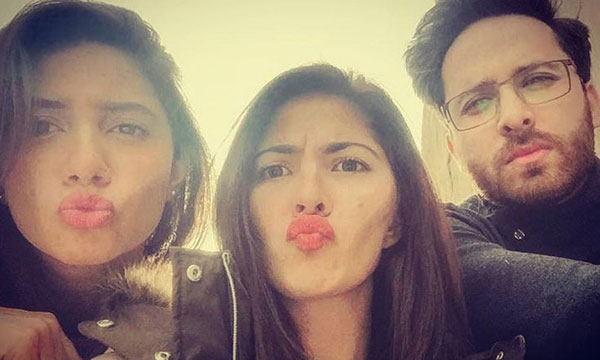 Seems like 2017 will be the year of Mahira Khan! The starlet has floored both India and Pakistan with her killer performance in “Zaalima” and “Udi Udi Jaye”. Her dream debut with Shah Rukh Khan is all the what the entertainment fraternity is talking about!

While she is flying high and receiving all the love from her fans for her performance in Raees, Khan is already up and about with the shooting of her upcoming Pakistani movie “Verna’.

Khan looks her usual pretty self on the sets of the movie!

@mahirahkhan clicked on the sets of #verna a film by @shomanmansoor

Is this cute kid starring in the movie to alongside MK? The cast & crew of the movie seems like one happy team!

The shooting is apparently taking place in Islamabad

Social media is excited to see from the set of Verna!

As usual, MK looks her beautiful self and we can’t wait to know more about her avatar!

The mastermind behind Pakistani blockbusters, Khuda K Liye and Bol Shoaib Mansoor will be making a comeback with Verna.

“This film has been Written and Directed by a man of Pakistan for the men of the world to listen to women. It is to encourage women to speak up … Khuda ke liye bol verna…..”, divulged Shoaib Mansoor.

Mahira Khan’s 7 Performances that Prove She is More than Just a Pretty Face!