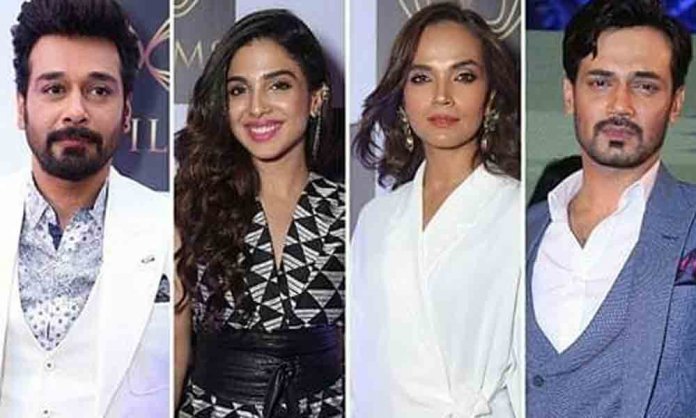 Brace yourselves up as Faysal Quraishi is returning to the silver screen with an upcoming Pakistani movie Sorry- A Love Story, that will also mark his debut film as the producer.

2019 already looks quite tempting in terms of the exciting projects in its bucket, including Maula Jatt 2, Paray Hut Love and Sherdil to name a few.

Sorry: The Love Story is the recent one to join the queue with a strong ensemble cast of Faysal Quraishi, Aamina Sheikh, Zahid Ahmed and Sonya Hussyn in the pivotal roles.

The veteran actor, Faysal Quraishi last appeared in 2015 Manto in a cameo and since then, the fans have been rooting for him to act in more movies.

The Cake star Aamina Sheikh will be one of the leading ladies in Sorry: The Love Story, alongside Sonya Hussyn, known and appraised for her role in a recent film Azaadi.

So here it is!!!! Cast of the movie "Sorry" #SorryALoveStory… Could I have dreamed of a better cast for my debut? Blessed and honored to be among such prolific actors! 2019 come soon! Directed by Sohail javed. Wardrobe: @emraanrajput Styling: @sajidstylist #SorryALoveStory #faysalqureshi #aaminasheikh #sonyahussyn #zahidahmed #sohailjaved

After leaving a mark on the small screen, the talented Zahid Ahmed will now take on the big screen and he is really excited to work with some most amazing names of the industry in his debut film.

Sorry: The Love Story will revolve around the dynamics of relationships that are a part of life. Though only the lead cast has been revealed so far at the curtain raiser that took place in Karachi, more details about the plot are yet to be unveiled.

According to the press release, this romantic-drama film will follow “the ups and downs of love, finding love, losing it, and finding it again”, directed and co-written by Sohail Javed.

Asma Nabeel of Khaani fame has co-written this movie that will go under the production phase in early 2019 and is expected to be released the same year under the banners of SJ Films and Faysal Quraishi Films.

Many showbiz stars were present at the curtain raiser to show support to the team of Sorry: The Love Story including Humayun Saeed, Fahad Mustafa, Mohib Mirza, and Aijazz Aslam.

Sonya Hussyn and others.

Will go under production in 2019

Expected to be released in 2019