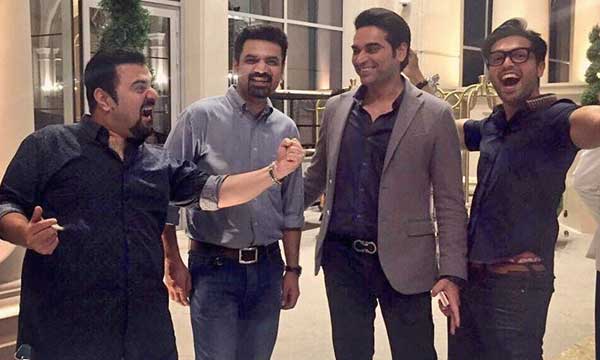 Movie-buffs loved the movie and critics lauded the flick for being the ultimate package of entertainment.

My most successful Selfie and like literally #greattimes #JPNA #hapinessisinbeingtogather

Then last year, Humayun Saeed announced that the sequel of JPNA is in the works and it will be bigger and better than its predecessor.

Now the cast of the potential blockbuster has been finalized and you won’t believe who is joining the golden trio of Ahmed Ali Butt, Humayun, and Vasay Chaudhry!

It is none other than the Actor in Law hero, Fahad Mustafa.

In an interview to Instep, the Jeeto Pakistan host, himself confirmed that he is very much part of JPNA 2.

“I’m working on Na Maloom Afraad’s sequel, which will be shot in South Africa so it’s going to be a lot of fun, Inshallah,”

While earlier, the prequel was shot in exotic locations of Thailand, this time the rom-com will weave a fun-filled adventure tale in South Africa.

We will not be seeing Hamza Ali Abbasi in the flick as he is busy with the shooting of  his 2 upcoming movies: Parwaz Hai Junoon and a Bilal Lashari film.

Hence, Abbasi has been replaced by Fahad Mustafa in the sequel!

Many might know that the director, Nadeem Baig also tried to rope in the Bollywood veteran, Rishi Kapoor to star in the movie’s second installment.

However, the Indian actor declined to be a part of the project! A report by Hindustan Times revealed:

“He was approached for a major role in the sequel to a Pakistani comedy called Jawani Phir Nai Ani. Film-maker Nadeem Baig has directed it. However, he politely turned down the offer”

The leading ladies are still a mystery and have not been finalized yet for part 2 of the flick. Will Sohai Ali Abroo, Mehwish Hayat and Ayesha Khan return to their roles, let’s wait and watch!

My most successful Selfie and like literally #greattimes #JPNA #hapinessisinbeingtogather

We hope that Jawani Phir Nahi Ani 2 will be as good as its daddy!