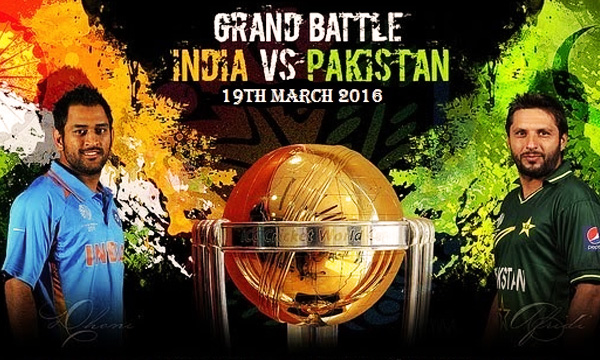 Kohli hit an unbeaten 55 as India comfortably chased down Pakistan’s total of 118 for five, reaching their target with 13 balls remaining in a match reduced to 18 overs per side because of rain.

Ahmed Shehzad and Shoaib Malik played crucial cameos to guide Pakistan to 118 for five against India in a World Twenty20 showdown Saturday which was reduced to 18 overs a side by rain.

Put in to bat on a moisture-laden Eden Gardens pitch that saw heavy rains through the day, Pakistan openers Sharjeel Khan (17) and Ahmed Shehzad (25) played cautiously at first and then lost their wickets as they tried to accelerate.

Indian spinners Ravichandran Ashwin and Suresh Raina looked dangerous in their opening spells on a track that provided turn and bounce, but the Pakistan batsmen did well to show patience.

Fresh from his match-winning exploits against Bangladesh, skipper Shahid Afridi (8) promoted himself to number three but the boom was missing from his shots this time around.

The hard-hitting batsman could only find a single boundary in his scratchy 14-ball stay as he walked back amid loud cheers from the capacity crowd.

Umar Akmal and Shoaib Malik then stitched together a crucial 41-run stand that helped Pakistan put up what seems a respectable score on board on a tricky wicket.

Akmal (22), whose 16-ball knock was studded with a boundary and a six, was caught behind off Ravindra Jadeja’s left-arm spin.

Top-scorer Malik (26), who hit three boundaries and a six in his 26-run innings, soon joined Akmal in the dug-out after trying to force Ashish Nehra’s pace.

Wicketkeeper-batsman Sarfraz Ahmed and Mohammad Hafeez finished off the innings as Pakistan got seven off the last over, but with the pitch playing tricks it still remained anybody’s game.

Scoreboard of the World Twenty20 match between India and Pakistan at the Eden Gardens stadium in Kolkata on Saturday:

India’s captain Mahendra Singh Dhoni won the toss and elected to bowl first in Saturday’s World Twenty20 showdown against Pakistan which was reduced to 18 overs a side by rain.

The match at Kolkata’s Eden Gardens had been due to start at 7:30pm (1400 GMT) but was delayed for an hour after rain fell through much of the afternoon before relenting at sundown.

India choose the same starting line-up that lost their opening match in the tournament on Tuesday to New Zealand.

Pakistan left out spinning allrounder Imad Wasim from the team that won their opener against Bangladesh and called up fast bowler Mohammad Sami as a replacement.

Mahendra Singh Dhoni’s India will be looking to bounce back from their shock opening defeat when they take on a resurgent Pakistan in Saturday’s World Twenty20 blockbuster in Kolkata.

Red-hot favourites India were stunned by an unfancied New Zealand on Tuesday when they were shot out for 79 in Nagpur — their lowest score on home turf in T20 internationals.

But India’s limited-overs skipper has full faith in his side that came into the tournament on the back of 10 wins in 11 T20 matches, including the victory in the Asia Cup.

View the match updates below:

“What’s important is how to turn around and how to come back strong and I think this team has done this plenty of times,” Dhoni said after the New Zealand loss.

After their stumbles in Nagpur, India’s frontline batsmen Rohit Sharma, Shikhar Dhawan and Virat Kohli will have to find their feet against a hostile Pakistan pace attack which includes the in-form Mohammad Amir. The Pakistani paceman, on the comeback trail after serving a prison sentence and a five-year ban for spot-fixing, ended with impressive figures of 2-27 in his team’s victorious opener against Bangladesh.

Although India registered a commanding victory over Pakistan in last month’s Asia Cup, their batsmen were far from comfortable against Amir, with Kohli congratulating him for “an amazing” spell of bowling.

While the pitch in Nagpur turned dramatically, Eden Gardens is seen as offering more bounce and Dhoni could well be tempted to play a fit-again Mohammed Shami on what is be the speedster’s home ground.

Pakistan had come into the tournament in woeful form and their preparations were not helped by a row over security which led to the match being switched from Dharamsala to Kolkata.

But their trouncing of Bangladesh has banished the gloom, with skipper Shahid Afridi leading from the front by spanking a 19-ball 49 and then bagging two key wickets in the 55-run win.

Afridi said the result was a “morale booster” ahead of the clash between the South Asian titans who are both former World T20 champions.

But he downplayed the significance of India’s opening match upset.

“They have been playing good cricket though they lost their last game,” said Afridi.