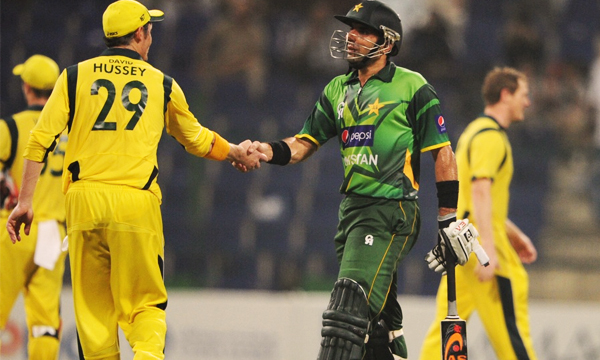 UPDATE: James Faulkner said Australia’s quest for the elusive World Twenty20 trophy was back on track Friday after his record-breaking bowling performance knocked out Pakistan and set up a must-win showdown against India.

Faulkner took 5-27 against Shahid Afridi’s team, including four wickets in the final over, to seal a 21-run victory after Australian skipper Steve Smith had earlier made an unbeaten 61 in Mohali.

It was a clinical performance by Australia who posted 193-4 before restricting Afridi’s men to 172-8 off their 20 overs on a docile track.

Australia are world champions in 50 over cricket and the number one Test team but have yet to win the World T20 in five previous attempts.

Faulkner, the first Australian to take five wickets in a T20 international, admitted his figures were flattered by some desperate lower-order Pakistani batting.

But he relished the prospect of what is now effectively a quarter-final against the hosts on Sunday as whoever wins will enter the semi-finals.

“I was lucky there at the end. More importantly, we are back on track,” he said.

“We have played well all summer back home. We showed what we can do with the bat. Looking forward to the next game against India, who are a tough opponent at home. We should be up for the challenge.”

A dejected Afridi, who will now decide on his international future, congratulated Australia and admitted the former champions had been outplayed.

“Honestly, we were simply not good enough,” Afridi, 36, conceded after the game.

“In the last four overs, we gave away 40 runs,” said Afridi who went wicketless in the match and made just 14 runs.

The stage for the Australian win was set by an unbeaten 61-run knock from Smith who shared key stands with Shane Watson (44 not out) and Glenn Maxwell (30) to rescue his side from a shaky 57-3.

Pakistan lost wickets at regular intervals and were never really in the hunt despite a valiant counter-attack by Khalid Latif (46).

After losing opener Ahmed Shehzad (one) cheaply in the third over, Sharjeel tried to speed things up before chopping on to his stumps off Faulkner.

Umar Akmal (32) lost his wicket to Zampa and Afridi was stumped after he danced down the track to attempt an ambitious shot off the same bowler.

The Australians were in early trouble but Smith, 26, batted sensibly to ensure his side did not squander the advantage of batting first.

Smith hit seven boundaries in his 43-ball knock and completed his second half-century in T20 internationals in the process.

Watson, who has announced he will quit international cricket after the tournament, came in lower down the order and provided some late fireworks in a 21-ball knock which included three sixes.

Australia opted for a new opening pair in Aaron Finch and Usman Khawaja for the crunch tie at the Punjab Cricket Association ground.

Khawaja, enjoying a purple patch with the bat, showed his aggressive intent early as he hit an off-colour Mohammad Sami (53-0) for two fours in the first over of the innings.

The left-hander then lofted Riaz over the fence for a six but he was out one ball later, losing his middle-stump to the fast bowler.

Riaz then dismissed David Warner (nine) with a ball that knocked off the stumps in a spectacular fashion.

Finch (15) was the next to go, failing to read a slow and low ball from Wasim.

Smith and Maxwell then steadied the innings, with a quick-fire 62-run partnership before Wasim made the breakthrough.

Scoreboard of the World Twenty20 match between Australia and Pakistan at the Punjab Cricket Association ground in Mohali on Friday:

Australia skipper Steven Smith won the toss and elected to bat in a must-win group match at the World Twenty20 against Pakistan in Mohali on Friday.

The Australians made two changes from the side that won the previous game against Bangladesh, bringing in Aaron Finch and Josh Hazlewood in place of Mitchell Marsh and John Hastings.

Finch, the top-ranked T20 batsman, is playing his first game of the tournament.

View the match highlights and updates for the Pak vs Australia world t20 below:

A stumbling Australia will need to raise their game when they take on Pakistan in a must-win group match of the World Twenty20 in Mohali on Friday.

The Australians handed Bangladesh a second straight defeat in their previous outing but survived a scare against Mashrafe Mortaza’s depleted side.

The reigning 50-over world champions have appeared tentative at best, going down to New Zealand in their opening encounter and sweating for a win against the Tigers.

“We haven’t been good enough in the middle overs. We made it difficult at the end,” captain Steven Smith admitted after the game against Bangladesh.

“Pakistan and India play well in these conditions and we have to do better. Our players have to adapt better,” he said, referring to his team’s next two outings in the tournament. 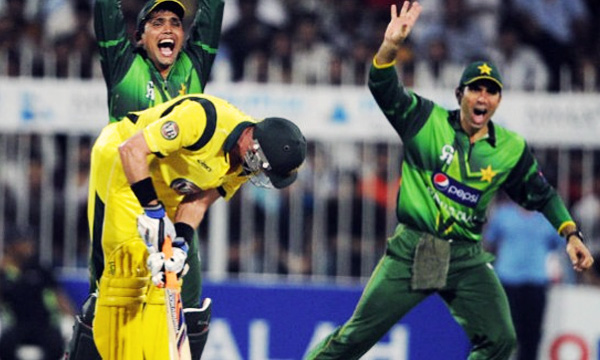 Pakistan is hurting after defeats to India and an impressive New Zealand, who have already booked their place in the semi-finals from Group B.

Another defeat will finish off Pakistan‘s hopes of advancing any further in the tournament, a huge disappointment for a side that was eyeing a repeat of their 2009 title winning feat.

Skipper Shahid Afridi, who has taken flak for his side’s performances, looked dejected as he hinted at an imminent retirement after the defeat to the Black Caps.

“In every game, we’re making mistakes and it’s not good for us. Maybe the next game will be the last one of my career,” the flamboyant all-rounder said.

“For now, we have to forget this game and focus on Australia,” said the 36-year-old who no longer plays Test and one-day cricket and has retired on several occasions.

Afridi might be tempted to tinker his playing eleven for the crunch outing given neither his seamers nor spinners have looked threatening against quality opposition.

Australia could consider bringing in the fit-again batsman Aaron Finch, who has yet to play largely because of the way his replacement Usman Khawaja has stood up at the top of the order.

Finch, who is the top-ranked batsman in the shortest format of the game, was dumped as T20 captain in favour of Test and ODI captain Steve Smith last month.

Khawaja made a match-winning 58 against Bangladesh after scoring a handy 38 against the Black Caps.