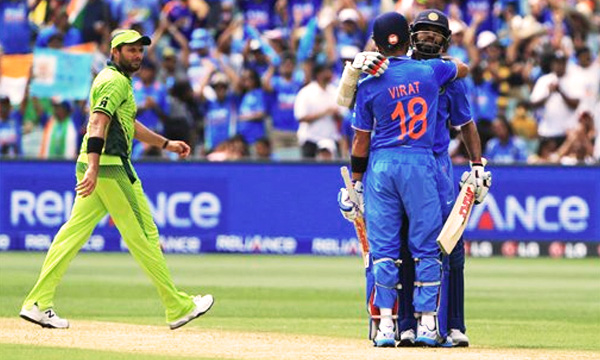 India and Pakistan will renew cricket’s most bitter rivalry this week after a two-year gap when they face off in the Asia Cup, a contest for regional supremacy which is also a final rehearsal for the World T20.

The biennial 12-day tournament, which is being held in Bangladesh for the second time in a row, begins on Wednesday night when the hosts take on India at Dhaka’s Sher-e-Bangla stadium — the venue for all the matches.

Local supporters will be looking to see if Bangladesh’s sharp improvement in 50-over cricket will translate into an upturn in their performances in the shortest form of the game, with the World T20 in India only weeks away.

But most eyes will be on Saturday’s glamour tie when India and Pakistan take to the field together for the first time since the last World T20 in 2014.

India-Pakistan showdowns usually draw hundreds of millions of television viewers, making it the biggest box office attraction in the sport.

But diplomatic tensions have meant that the two teams have not played any bilateral series for more than three years and their rivalry is therefore restricted to multi-national tournaments.

Pakistan, furious that India has rebuffed repeated pleas to play a bilateral series at a neutral venue, will be desperate to cause an upset against their giant neighbour.

With the reigning champions Sri Lanka going through a rebuilding phase, most pundits expect India to cement their position at the top of the T20 world rankings ahead of their staging of the format’s premier tournament.

Although India are likely to give most of their players a work-out in the build-up to the World T20, team director Ravi Shastri made clear they would not be taking their foot off the gas.

“Whether we play Bangladesh, Pakistan or Sri Lanka and wherever we are playing, we have to continue our good form,” Shastri told reporters in Dhaka.

India’s star batsman Virat Kohli also quashed any suggestion that the team would be holding back with only weeks to go before the World T20 begins.

“When I go into field I go to play cricket with bat and ball, playing with Pakistan is not different. It’s competitive and Pakistan is a strong team,” Kohli said on Tuesday.

India are set to be without Dhoni for the Bangladesh opener after the skipper suffered a back spasm during a practice session on Monday.

“In the T20 format any team can beat anyone on a given day. Still, if we have to single out a team as favourites, I would say it is India,” he said.

“They are an in-form team. Also they now play Twenty20 cricket more than anyone else.”

Two crushing Indian victories over Sri Lanka in their recent three-match series underlined how much the islanders are missing batting greats Kumar Sangakkara and Mahela Jayawardene, who have both retired since the 2014 triumph.

Pakistan, who will become the first side to play 100 Twenty20 internationals during the tournament on February 29, will arrive late in Dhaka after the finale of the inaugural edition of the Pakistan Super League.

Bangladesh will hope home advantage will help them build confidence before heading to India for the World T20 qualifying round from March 8-13.

The Tigers had a dream run in 2015 in one-day internationals, but when it comes to 20-over cricket they are still ranked among the minnows.