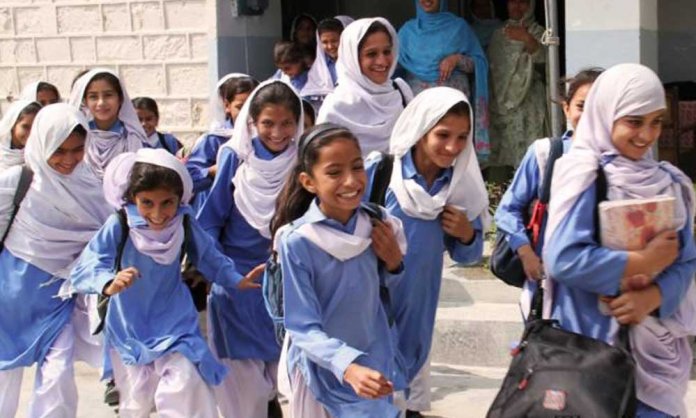 Khyber Pakhtunkhwa recently made it compulsory for the schoolgirls to coverup according to an announcement made by Adviser to Chief Minister on Elementary and Secondary Education Ziaullah Bangash.

All the public sector schools were required to abide by the instruction to ensure that girl students wear an abaya, gown or chador “in order to protect them from any unethical incident”.

The order was first circulated in Haripur district last week.

“We came across some situations during our recent visits to tribal areas and Kohistan that prompted us to take this decision,” he told DawnNewsTV.

“We have sensitive areas in the province which require safety measures for the children,” he said, adding that the choice is “also in line with the tribal values and the traditions of Islam”.

“Our focus is on educating our girls and we should take every step to enable this,” the advisor added.

However, former KP education minister and Awami National Party MPA Sardar Hussain Babak criticized the decision, saying it will have a negative impact on education trends.

“To make the abaya or burqa mandatory through a notification will have a negative impact,” he said, adding that in KP many school-going girls already wear the burqa.

Most Influential Muslims: Imran Khan, Justice Sheikh Mohammad Taqi Usmani & Others Make it to the List

Following extensive criticism by the public over the decision, the Khyber Pakh­tunkhwa government deci­ded to withdraw its earlier notice.

“KP Government doesn’t believe in compulsion, and citizens are free to decide what’s best for them. The notification circulating regarding compulsion of Abaya for the girls is hereby withdrawn with immediate effect,” the update read.

KP Government doesn’t believe in compulsion, and citizens are free to decide what’s best for them. The notification circulating regarding compulsion of Abaya for the girls is hereby withdrawn with immediate effect#KPKUpdates pic.twitter.com/1LhhwEX33V

Twitter also reacted to the decision. Have a look:

Sanity prevails. Why should girls be penalised for boys misdemeanours? Punish them for targeting the girls – cannot penalise our girls. Let us not revert back to dictator Zia's time. https://t.co/504gJvZg9m

I respect women in Hijab also those who choose not to. It is a matter b/w a believer n her God. While KPK govt shd focus on that no girl child is left without an education & raising the standard of education to compete globally all they choose to do is to impose hijab. Meh#abaya

Imposing burqa won’t put a hijab on young minds. Neither it will stop men from harassing women. It only will put a full stop to right to choice in a country where choosing for yourself sometimes is equivalent to choosing death sentence. KPK, please grow out of your insecurities. pic.twitter.com/SVengAkIbF

What is this @PTIofficial? Its very disturbing, this is #Talibanization which everyone should #Resist. #Religion is the personal entity of any individual, you can not enforce. Its good that #KPK govt have withdrawn the notification but this mentality needs change #Pakistan. pic.twitter.com/ZKd7zPGMz1

Some people are condemning the step of kp government that female students must wear abaya or gown just for that this is step of snatching girl liberty. We have a religion that order us to wear abaya and that is also our custom. #kpeducation.#ziaullahbangash

What are your thoughts? Was taking back the notification a sensible decision?