Home Entertainment Tich Button – Is It Worth Watching?
Advertisement 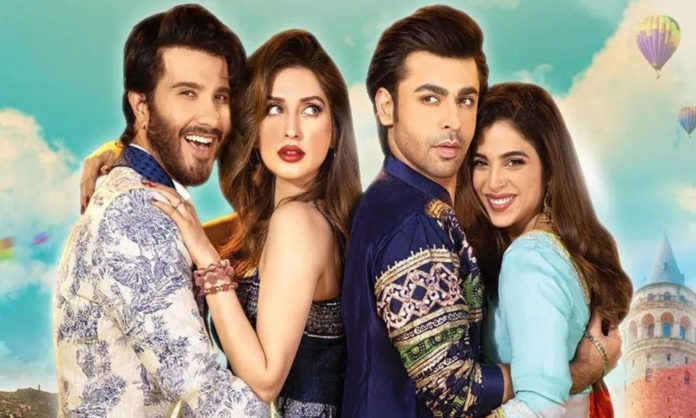 After many hiccups, Tich Button was released in cinemas a few weeks ago. Written by Faiza Iftikhar and directed by Qasim Ali Mureed, the film was produced by Jerjees Seja, Urwa Hocane, Farhan Saeed, and Salman Iqbal. The movie is a lighthearted rom-com and even though it didn’t manage to left a mark on the viewers it was everything the cinema needed in the post-Maula Jutt phase.

Tich Button’s main lead characters Leena (Iman Ali) & Kaka’s (Farhan Saeed) chemistry saved the day. The pairing on different occasions managed to create a spark. However, not the same can be said about their acting and characters. While Leena’s character was made to look and feel beautiful, her subpar performance was a miss. Meanwhile, Kaka’s character on the other hand was both written and delivered perfectly. The comedic timing of the character coupled with smooth dialogue delivery and flawless avatar is one thing that can keep the audiences hooked for hours.

The second lead couple featuring Saqib (Feroze Khan) and Shakeela (Sonya Hussyn) was also influenced by other movie characters and didn’t bring anything unusual to the mix. Feroze khan’s acting is nothing like his usual roles and on different occasions, he feels like a different person in the way he speaks and acts. Meanwhile, Sonya who managed to play some of the most iconic roles on the TV screen played the role of an average Punjabi girl who knew nothing less.

Meanwhile, Qavi Khan and Sohail Ahmed who managed to land small roles, and veteran characters Samiya Mumtaz and Marina Khan ended up playing the mothers of the lead cast. These characters feel off as if there was no work done on their background stories.

Elements Of The Movie

Despite having an average storyline the music, choreography, and cinematography are what stood out in the entire movie. The Urwa Hocane’s dance number was the first song that was released as part of the promotional campaign and managed to stand out as well. The fans got to see Urwa in a whole new setting and her screen presence made the song even more iconic. The outfits, sets and colorful and visually appealing attires made the movie what it is.

While, the plot and storyline are something we have already seen in the previous years on both local and cinemas across the border, the treatment given to the movie was new which was the right step in the right direction.

Since the movie launched under dreading circumstances, Tich Button has still managed to dominate the industry which proves that sticking to the usual storyline which offers nothing out of the box can be a safe route for directors and writers in Pakistan.

Have you watched Tich Button yet? Let us know in the comments below.