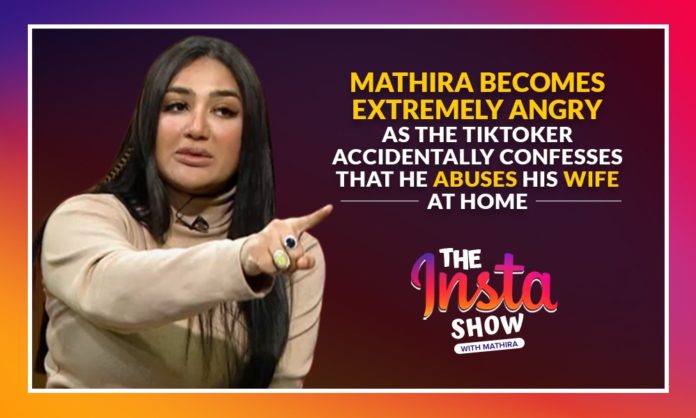 Areeshay Soomro and Asad Ray were interviewed by the extremely talented actress and TV host Mathira on the eminent Insta show exclusively on BOL Entertainment.

Tiktoker Asad Ray had a fight with his wife. He reveals on the live show that he slapped her wife before coming to the show, on which Mathira got extremely angry. She was astounded by his statement and struggled to find the right words to express her disgust at this domestic violence.

Mathira aggressively responds to the Tiktoker Asad Ray that a man should respect her wife. The wife is not to be considered the husband’s slave. She further added that she disgusts those men who proudly beat their wives at home.

She criticized the Tiktoker by saying that a beaten wife is not something on which you shamelessly cackled on National Television. The Tiktoker claimed that he respect her wife first. He continued by saying that a couple without conflict would not be in love.

In the end, he admits that he only gave her a little smack and that it was not a severe incident. Mathira came to the conclusion that his choice of words was poor.