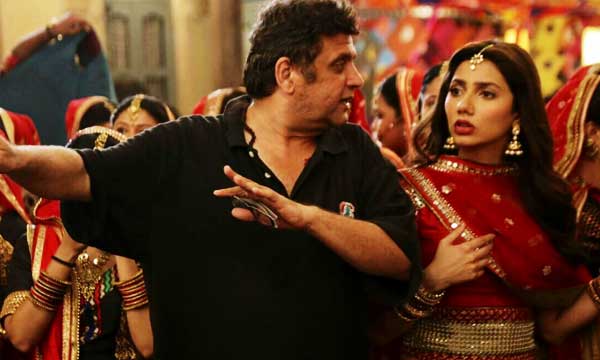 Can’t 25th of January come any sooner? The much awaited Bollywood gangster flick, Raees ft. Mahira Khan and Shahrukh Khan has got everyone excited. The posters and the songs have made us fall in love with the couple and we just can not get enough of their electrifying love equation!

Just yesterday, the latest dance track ‘Udi Udi Jaye’ made waves on the web. But it evident that  Mahira Khan is stealing all the spotlight in her debut film!

When the starlet took to Twitter to release the song on her social media, Khan’s fans went into a frenzy!

But it was Raees’s director, Rahul Dholaki that made the twitter conversation all the more interesting!

remember the first day at the rehearsal and the blisters you got on your feet ? You pulled it through @TheMahiraKhan

Seems like both the actress & the director got nostalgic, remembering the happy memories they made on the sets!

I'll never forget, those blisters hurt for a while! What I will always remember is you saying you'll do it, it'll be fine.. pic.twitter.com/LbFKgRDXtw

Mahira’s dream debut has taken Bollywood by storm & the actress is super excited for the release of the movie!

Always always wish upon a star.. ✨

Seems like Khan is missing the cast & crew of Raees way too much!

And just because.. Baandro saalo 🐒 Miss you monkeys. #Raees

While they all might be divided by borders, they are united through the heart!

We all look pretty shyte but this is the only picture shabo took (allowed us) …. I love you guys 💕 #Raees

King Khan is currently in India promoting the film while rumors of Mahira Khan doing Skype interviews have been circulating around. Seems like, a lot more is to happen before January 25th, 2017!

Let’s keep our fingers crossed to witness the ultimate greatness of both the Khans in Raees!