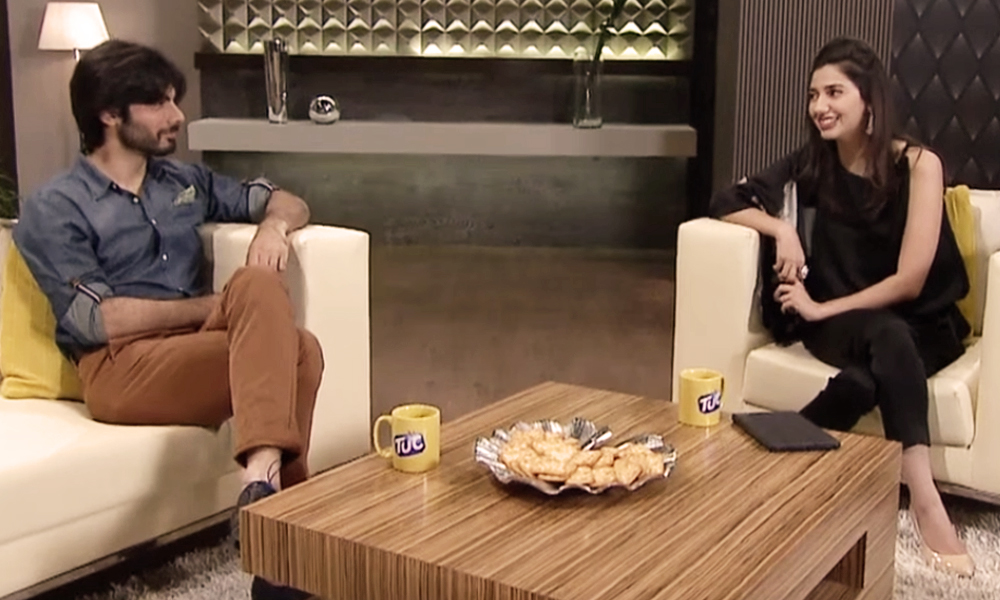 The Humsafar Queen Mahira Khan is all set to make her Bollywood debut in the upcoming movie Raees with the ‘King Khan of Bollywood SRK’. While her fans anxiously await the movie releasing this January, let’s talk about a funny blooper video of the actress with Fawad Khan that had surfaced online some time back. The actress was caught off camera asking for a cigarette from Fawad Khan.

Fawad Khan was the guest in Mahira Khan’s popular show TUC- the Lighter Side of Life. As a video trending on social media reveals, Fawad Khan and Mahira look absolutely adorable.

At one point Fawad Khan dropped coffee on himself while talking and said something that could not be heard due to the beep sound. Mahira can also be heard saying “I want a smoke” to which Fawad Khan responded in a casual way to “go out and have one”.

All of this happened during the commercial break; however, the scene was caught on camera and the video has been trending since then.

Fawad and Mahira Khan have been in the limelight since their hit drama serial Humsafar and the two have now been making waves in Bollywood. People cannot wait for Mahira Khan’s upcoming movie Raees with SRK and Fawad Khan’s Ae Dil Hai Mushkil that is about to hit the screens soon.

Both the stars totally ruled the LSAs 2016, giving fans some unforgettable moments to cherish until next time they are seen together on screen.

Fawad Khan has recently been in the news for speaking over the cinematic exchange between the two countries. In his latest interview with Hindustan Times, the Kapoor & Sons actor stated, “The exchange of talent is increasing slowly. I would like an active exchange of movies too.”

“We have been working on films and have been actively looking for talent from the Indian film industry to work within Pakistani movies,” he said. Fawad also stated that it “would be great” if Pakistani films release in India.