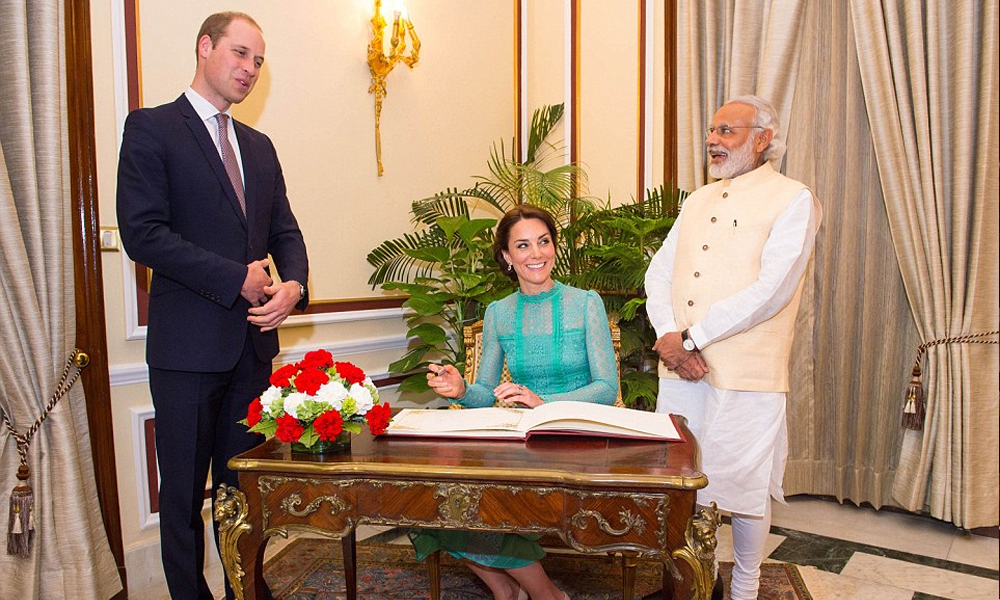 Britain’s Prince William and his wife Kate played cricket with children and mingled with Bollywood superstars at a glittering gala dinner as they began their tour of India in style Sunday.

During an action-packed first day of their week-long visit to the subcontinent the royal couple displayed handy batting skills on Mumbai’s Oval Maidan in front of Indian cricket legend Sachin Tendulkar.

Kate, wearing a long pink and green printed tunic dress by Indian designer Anita Dongre, connected well with a few shots while William even smashed a six, albeit with a tennis ball and a very short boundary.

“Royal afternoon at the Oval with the Duke and Duchess of Cambridge. Bowled over by their humility,” Tendulkar later tweeted.

William and Kate received a warm reception at the western Indian city’s famous park as they met representatives from three charities and chatted and played ball games with disadvantaged children.

The Duke and Duchess are on their first official visit to India, whose 1.2 billion population has long been fascinated with the monarchy of its former colonial masters.

The British royals touched down in Mumbai shortly after 11:00 am (0530 GMT) and their visit started on a sombre note with the laying of a wreath at the Taj Mahal Palace Hotel to victims of the 2008 Mumbai attacks.

from there they headed to the maidan where they learnt about the work of three local charities who help some of Mumbai’s most vulnerable children and chatted with Indian cricket great Dilip Vengsarkar.

They also took an open-top bus tour with youngsters who had received help from a non-governmental organisation.

After the cricket, William and Kate headed to the ancient Banganga Tank, part of a temple complex and a hugely significant site in Hindu mythology, where makeshift homes sit beneath luxury skyscrapers in the plush Malabar Hill district.

Presented with garlands on arrival, the couple pressed their hands together in the Hindi salutation namaste and scattered petals in the water.

They then met and played football with impoverished children from slums around India’s financial capital.

In the evening, the royal couple schmoozed with Bollywood film stars and leading lights from the Indian business community at a charity reception at the Taj Mahal Palace hotel.

William, dressed in a black tuxedo, and Kate, wearing a blue gown, walked the red carpet, stopping to smile and pose for cameras.

Inside the reception, they mixed with a host of Hindi movie stars including Shah Rukh Khan, Anil Kapoor, Sonam Kapoor and Aishwarya Rai Bachchan.

William, 33, who is second in line to the throne behind his father Prince Charles, and Kate, 34, will wrap up their Mumbai stay on Monday morning by meeting young entrepreneurs.

In Delhi, William and Kate appeared in good spirits as they crouched down on the floor with the boys, who live in the nearby station. They met some of the 6,000 children who travel to New Delhi each year, often fleeing from abuse or appalling poverty.

The Duchess kept her look simple and casual in a long maxi printed dress and flat pumps.

They then head to New Delhi where they had lunch with Prime Minister Narendra Modi. The Indian PM hosted a musical lunch for the Royal couple. Kate wore a knee-length light blue dress, William a dark suit and tie, while their host – an observant vegetarian – appeared in a traditional white kurta and cream waistcoat.

The couple will also spend two days in Bhutan where they will meet the Himalayan nation’s king and queen and embark on a six-hour hike.

William and Kate will finish their tour in Agra on Saturday.