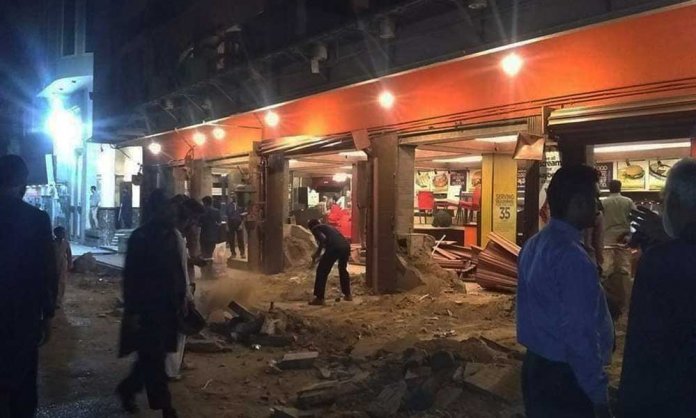 Update: The anti-encroachment drive in Karachi has now reached the eateries at Mohammad Ali Society in Karachi.

Pictures have surfaced of authorities taking action of illegal eateries being taken down by the officials.

There is no word or pictures on the other eateries as of now.

The encroachment operations across Karachi have stirred a number of mixed reactions from its citizens. More than 1700 illegal structures have been taken care of during the drive.

On one hand where people are praising the government for their initiative to rid the city of its illegal operations, whereas others are quite sad to see their favourite stores and shops go down.

The drive started its major operation in Empress Market Saddar where it took down thousands of illegal shops built around the iconic premises. Reportedly, 90% of the encroachments have been removed, while cleaning up of debris is still in progress.

According to KMC’s Municipal Commissioner Dr. Saifur Rehman, the heritage building will be restored with all its past glory and will be surrounded with beautiful parks and gardens to add to its beauty.

KDA conducted an anti-encroachment operation in the city’s Gulistan-e-Jauhar on Friday night following in the footsteps of KMC. The official body also demolished many restaurants and shops in the area including the Continental Bakery and Samama Centre.

Continental Bakery Torn down by KDA

A notice of encroachment operations to be held in the upcoming days has also surfaced. The areas include Chandni Chowk, Allama Iqbal Road towards Tariq Road, Jauhar Chowrangi, and other areas.

The famous Noorani Kabab House has also received a legal notice by Sindh Building Control Authority and has been sealed. The reason behind this is because the eatery was found to be built on the residential land and was being operated commercially.

We have yet to see how many more well known illegal commercial operations are yet to be taken down.