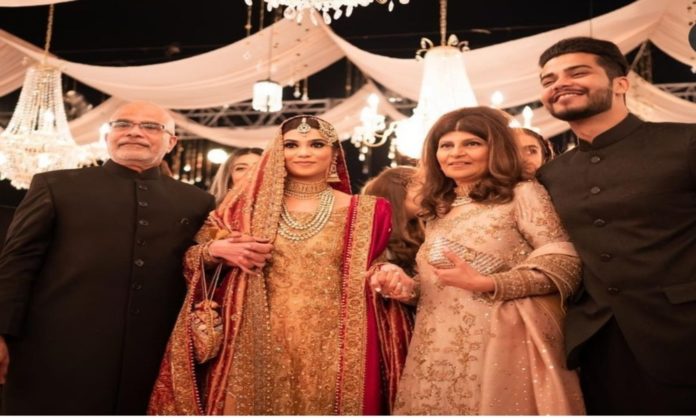 Rubina Ashraf’s daughter Minna Tariq’s wedding started over this week and needless to say that it was a star-studded affair. The wedding festivities started with a small intimate nikkah ceremony followed by dholki and a grand shendi event. If you have missed the details. Here are all the highlights you need to know.

Meanwhile, take cues from the bride to create looks for your upcoming events.

The small rather personal day for every bride to take in all the love and blessings is the Mayun/Mehndi day. Minna Tariq was all dolled up in traditional yellow attire with delicate handmade jewellery. The bride was all gleaming with minimal makeup yet a glowy look. The couple was all smiles as they posed for the camera. Meanwhile, the maestro of mehndi outfits, Farah Talib Aziz designed the outfit for the bride.

Take a look at some pictures from the dholki event.

Minna’s Shendi took place last night which was nothing less than an extravagant event. The bride was dolled up in a bright red lehenga with intricate design and heavily embellished maroon dupatta. The bride paired the outfit with an Indian style Kundan set.

The majority of the media clan including actors and celebrities attended the wedding. The Sabzwari family was spotted with Sadaf Kanwal. Meanwhile, Sunita Marshal, Omayr Waqar, Nida Yasir along with Yasir Hussain, and many others were seen.

Many stars set the stage on fire with their killer moves. Among those Omayr Waqar also did a killer performance on stage meanwhile Khoji filmed and danced along with him.

Among other celebrities Javed Sheikh, Asma Abbasi, Shabbir Jan also attended the wedding with their families.

Read More: Aima Baig In Hot Waters For Not Paying Her Taxes

However, the highlight of the night was the rukhsati. Filled with bittersweet moments the bride bid farewell to the family.

A post shared by SS Photography – By Saba Sahar (@ssphotography_official)