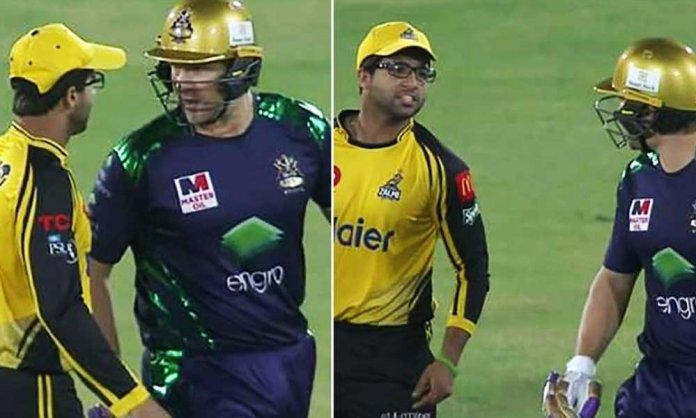 Pakistan won last night as Quetta Gladiators took the Pakistan Super League (PSL) 4 trophy home! While Karachi and Pakistanis stood proud of the achievements and applauded the efforts by our Army and Ranger officials.

However, Peshawar Zalmi’s batsman Imam-ul-Haq is now facing severe backlash for his disappointing performance for his team and the insult he showed to senior and former Australian all-rounder Shane Watson.

Ahmed Shehzad and Shane Watson were the opening batsmen from Quetta’s side who were brought in to chase down a target of 139. However, after they reached 19-0 in the third over, Watson was the first one to return back to the box after being run out.

He started to walk back to his team when Imam-ul-Haq, known for being the nephew of Inzamam-ul-Haq exchanged heated words with the senior player.

I genuinely have no idea what has happened, but Imam seriously needs to check his act. Shane Watson deserves a lot of respect & even if he did start it, Imam shouldn’t have reacted. pic.twitter.com/hr4DNrRCrB

However, it was Shane Watson whose team walked away with a glorious win and sent a message to Imam and the other Zalmis that this time it is the Gladiator’s era! Nonetheless, social media disliked Imam’s actions and bashed the young man on different platforms.

Following the backlash, Imam has now apologized for the whole episode.

“My reaction to Watson’s inappropriate abusive comments was avoidable, for which I apologize”

Yesterday’s incident happened in the heat of the moment. My reaction to Watson’s inappropriate abusive comments was avoidable, for which I apologise. It was a good match and a great HBL PSL 2019, let’s enjoy its success. Congrats to Gladiators and Watson for the trophy and awards

Saying farewell to a few of the main men @TeamQuetta. It has been such an amazing 5 weeks or so with my time in Karachi being the absolute highlight. What a way to finish things off last… https://t.co/kLLEvmdcbG

Feeling sorry for you man💔… whatson…Pakistani youngsters first of all need to learn how to treat someone…PCB must teach them some manners…and imam ul haqq should be banned for at least 5 or 6 matchz to realiz his mistake…#Imamulhaq pic.twitter.com/o0QnMViAJ7

Spirit of PSL vs Shit of PSL
#imamulhaq 😠😠#Parchi pic.twitter.com/Tz0qUXiAkK

U own huge respect nd love @ShaneRWatson33 Sir! Nd the whole nation is thankful to u for coming to Pakistan nd we r sorry for misbehaviour of #imamulhaq. pic.twitter.com/5VD8zFhNni

This is Ridiculous! This moron @ImamUlHaq12 especially went out of the huddle to sledge and misbehave with the legend @ShaneRWatson33. How dare this jerk talk to such a senior player like this? How dare he misbehave with our honorable guest? Unacceptable! #PSLFinal #ImamUlHaq pic.twitter.com/3BqPre6wKV

We are really sorry legendary @ShaneRWatson33 #Imamulhaq is the piece of shit, you came into cricket by the help of your uncle.@ShaneRWatson33 sir We all Pakistan’s thankful to you to came in Pakistan. pic.twitter.com/OkhfTT6gDj

Shameful act by Imam ul Haq… Shane Watson is our guest who come in Pakistan for PSL…#PSLFinal #PSL2019 #Imamulhaq@ImamUlHaq12 pic.twitter.com/pLWijMVVay

When you invite guests to your home, don’t treat them like this. Poor from #ImamUlHaq to give Shane Watson a send-off when he was out#ShameOnYouParchi#HBLPSLFinal pic.twitter.com/bNVVjowSPH

I’m demanding to the @TherealPCBA that you should also train the moral of such players. these players are not just cricketers they are also the beauty of peaceful Pakistan.
so please take a strong action against the #imamulhaq that nobody should even think again like this. pic.twitter.com/nelC3f78M4

What do you think about Imam’s behavior? Was it justified?