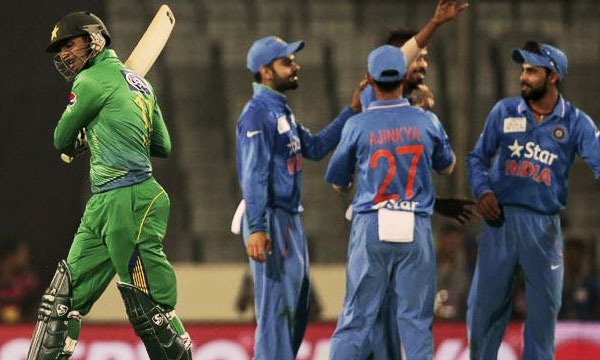 Pakistan said Saturday it would send a security team to India next week to survey the situation on the ground before the country’s cricket squad travels to play against their arch-rival during an upcoming India-Pakistan World T20 tie.

The teams are set to square off in India’s Kolkatta, Dharamsala and Mohali during the World Twenty20’s first round that kicks off on March 8 and ends on April 3.

Islamabad has already voiced concerns about security in India, saying there were specific threats from Hindu activists who forced the cancellation of a meeting between cricket officials from the two countries in Mumbai last October.

“A three-member security team will depart for India on Monday to look into the security situation,” Interior Minister Chaudhry Nisar Ali Khan told a press conference in Islamabad. “Our team will be sent to India only if the initial report is positive,” the minister added.

The South Asian adversaries have not played a bilateral series for more than three years amid diplomatic tensions.

Those were worsened by a January attack on India’s Pathankot airbase, which came days after Indian Prime Minister Narendra Modi’s surprise peacemaking visit to Pakistan in December.

Pakistan‘s team is scheduled to leave for India next week; however, the interior minister said the trip could be delayed if conditions on the ground are found to be unsatisfactory.

“It will make no difference if we have to delay the team’s departure until we get a clear message that India is safe for our team,” said Khan.

“People of Pakistan want their team to take part in the T20 but at the same time we cannot remain oblivious to the threats being hurled out by extremist organisations in India.”