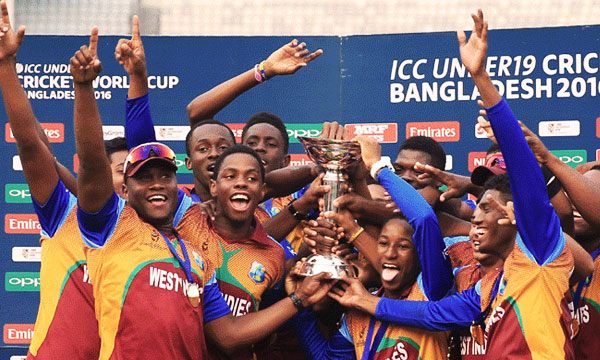 Keacy Carty struck an unbeaten 52 as the West Indies defeated three-time champions India by five wickets on Sunday to clinch their first ICC Under-19 World Cup.

Carty smashed his first fifty of the tournament to guide the West Indies to victory in Dhaka with three balls to spare after India were bowled out for just 145 in 45.1 overs.

West Indian pacemen Alzarri Joseph and Ryan John grabbed three wickets each to restrict the highly-fancied Indian batsman after the West Indies won the toss and elected to bowl.

Keemo Paul provided crucial support for Carty with an unbeaten 40 as the pair shared an unbroken sixth-wicket stand of 69. The pair steered the West Indies home after they were  struggling on 77-5 at the Sher-e-Bangla National Stadium. Left-arm spinner Mayank Dagar had given favourites India hope after taking 3-25 from his 10 overs to leave the West Indians reeling, but Carty and Paul kept their cool to deny him any more breakthroughs.

All-rounder Paul, who had claimed 2-17 during his bowling spell, hit just one four and one six in his 68-ball knock.

“We weren’t supposed to be champions but we came out on top. The pacers used the pitch to their advantage, they stood out for us. Carty and Paul are aggressive players, they made the adjustment. They kept a calm head.”

Fired-up paceman Joseph grabbed three wickets in his opening spell and finished with 3-39.

India’s hard-hitting batsman Rishabh Pant was stumped in the first over by wicketkeeper Tevin Imlach, leaving the Indians, who were playing in their fifth final, unsettled early on.

Joseph, arguably the fastest bowler in the competition with deliveries of more than 145 kph (90 mph), then forced an edge from Anmolpreet Singh with a vicious short ball, before trapping skipper Ishan Kishan in front, to leave India struggling on 27-3.

Medium pacer John was the other standout for the West Indies, taking 3-38.

Kishan blamed his side’s poor catching for their defeat.

“The bowlers bowled in the right areas. In the fielding, we were good in the beginning but we dropped crucial catches,” he said after the match.

“It was difficult to bat, but we were used to these conditions.”

Sarfaraz Khan made a lone stand for India with 51 off 89 balls but wickets continued to tumble at the other end and India succumbed with almost five overs to spare.