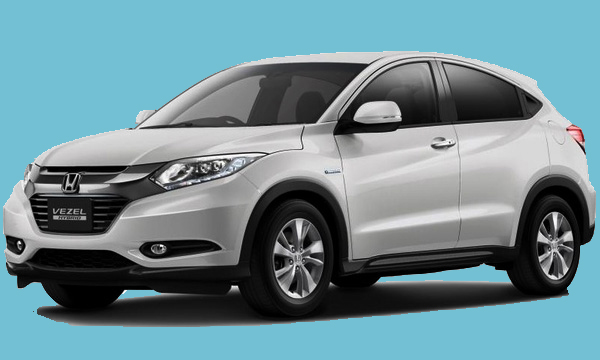 Honda Vezel, the 5-door mini-SUV was first seen in 2013, at the Tokyo Motor Show. The crossover was initially just for the Japanese market. The company later launched the car with an HR-V badge across international markets, reviving the HR-V name through Vezel.

Vezel makes are hybrid models, which come with a 7-speed dual clutch transmission, while HR-V non-hybrids come with a Honda CVT gearbox –  in some ways, the Vezel is similar to Honda Fit Hybrid.

Honda Civic 2016 Review: What to Expect?

At first glance, the vehicle looks compact, but that’s not the case, it’s actually a big vehicle with decent space inside. It has a chassis design, allowing Honda to design the suspension accordingly.

It weighs around 1330KG and is approximately 14 ft. (4,294mm) long. The Civic is almost 15Ft., however, comparatively, Vezel has more interior space because it does not have a boot. The exterior has has fluid lines and curves which originate from the front and go all the way back to the end.

The headlights are narrow, yet sharp, and follow the curves on its metal sheet. The Hybrid has lots of cuts, corners, and curves, while at the bottom of the front bumper there is a gaping opening in the middle.

The sides have fog lights on top of air splitters, giving the ride an aggressive yet sportive look from the front. Moving to the rear, it hunches downwards giving it a look of a hatchback car. It is also accompanied by falling roof lines, making a sharp fin in the center.

Under the Honda logo, on the trunk, there is a small embedded button to lift the lid. The overall body looks wide, however, it is not much different from the Civic once again. While the Civic is 1,755mm in width, the 2016 Honda Vezel is 1,772mm.

The car does not need a physical key for the doors, it only requires a fob with automatic lock and an unlock button, it also has a push-start button instead of a regular ignition requiring a key. Also, if you hold on to the lock button for a few seconds, the side mirrors retract.

The interior is smart, with multiple controls lots of options, giving you more to experiment wth. At first, it kind of worries you because so many controls mean it’s a frustrating car, but that’s not the case with the Honda Vezel 2016.

The dashboard and door panels have an attractive tangerine faux leather, with a black dashboard top, however, the quality of the plastic is not impressive. There is a nice long vent in front for the A/C and underneath it is the glove department.

There is no head unit in the car, according to Honda officials, all imported cars now have no head units, instead, there seems to be a hole in the middle of the dashboard instead underneath which is the climate control panel.

The temperature within the car can be controlled by both the driver and front passenger. Each door has a speaker embedded within, however since there was no unit head, the audio quality is still a mystery.

The Honda Vezel 2016 comes with a 1.5L engine, with electronically heated seats, a pleasant wheel grip, easy to manage cruise control, with storage space inside the car. For convenience, there is a 12V power outlet, right under the center console, along with HDMI and USB Hub.

The car also comes with adjustable cupholders (2) and pockets for storage options as well.

The Honda Vezel 2016 sports a 1.5L twin-cam internal combustion engine (ICE) also called Earth Dreams, along with an electric motor. The battery is in the trunk in place of the spare tire you usually find.

The ICE rates at 30 BHP, whereas according to Honda Motor Japan its 128 BHP, while providing 156 N.m torque while the electric motor gives out 160 N.m torque.

The turbo engine is almost the exact copy of the 2016 Honda Civic, but with some turbocharging tweaks. You get three generic driving modes:

Coming to the fuel average, Honda claims the Vezel goes 24km/l whereas some claim its 20km/l, whereas ECO mode may provide more than 20km/l, however, many say that it only gives 15-17km/l.

The 2016 Honda Vezel is equipped with:

Each model has a different price tag, whereas the RU3 is for PKR 3.7million, while Vezel prices vary from 3-4million, respectively.

Huge Penalty For Automakers Who Delay Delivery Of Cars