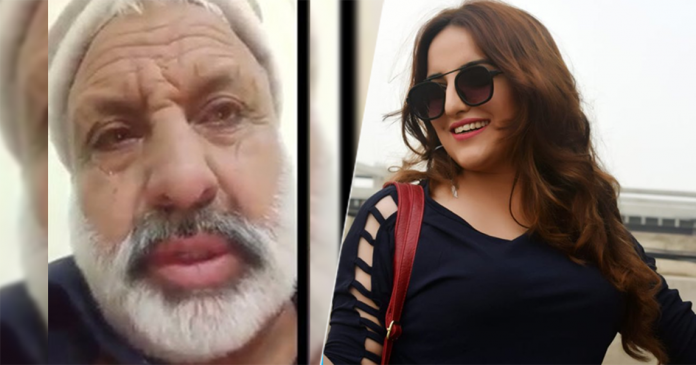 A video of Hareem Shah’s father, Zarrar Hussain, is going viral on social media. In the video, the man is heard apologizing to the country on behalf of his daughters.

However, as soon as the video hit the internet, Hareem Shah requested the Pakistan Army and forces to provide security to her family as they were being threatened.

In the video, Hussain says that he is embarrassed and ashamed of his daughter’s actions, and apologizes to everyone, including those who became a victim.

He further adds that he apologizes to his family and relatives and prays that Fizza Hussain Shah returns.

While shedding tears, he said:

I, Zarrar Hussain sHAH, I DONT HAVE ANY WORDS, FOR THOSE PEOPLE, RELATIVES, AND FRIENDS AND OVERALL ALL RESPECTIVE INDIVIDUALS, WHO HAVE BEEN IN SHOCK. I DO NOT HAVE WORDS, I CAN ONLY APOLOGIZE.

tHEY SAY THAT LIFE ITSELF GIVES YOU PUNISHMENT FOR SINS, MAYBE i HAVE HURT A POOR SOUL’S HEART,  i HURT MY FATHER AND MOTHER, FOR WHICH I AM BEING PUNISHED FOR.

Watch the Video Below

On the other hand, Hareem Shah claims that her father was forced to record this video against his will.

She added that she will expose those behind this act and will soon reveal more details.