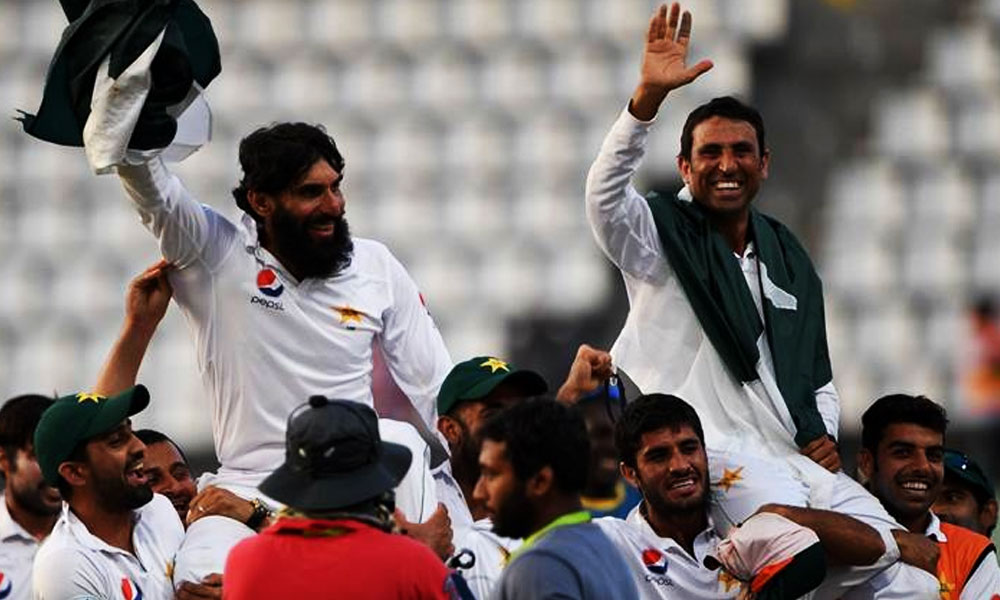 Cricket has changed, for good or for worse, Pakistani cricket, cricketers, and fans worldwide have bid farewell to two of the most amazing, talented men who didn’t just play cricket, but lived and breathed it.

It was indeed a heartstring-tugging moment when Misbah-ul-Haq, Pakistan cricket team’s most successful skipper, no doubt one of the most courageous one, walked onto the field to play his last innings.

Who better to bid him farewell with a smile and a warm hug than the man who has emerged as undeniably Pakistan’s greatest Test batsman, Younis Khan!

Younis Khan’s Retirement Gift has Made Every Pakistani Proud!

The moment is best described in the words of a die-hard fan of Misbah-ul-Haq and Younis Khan, Jarrod Kimber;

“Misbah walks out slowly, you only see him from behind, fiddling with his helmet, and looking a bit stiff. I think about all those times he looked like the fittest guy in the team despite his age, but now he walks like he’s 42, and then he swaps his bat from one hand to the other as he sees someone walk towards him. It’s Younis, and the first time I saw this, before Younis had even come up to Misbah, I was welling up.

It was exactly as I would want to see it: Misbah, slow moving and closed off, looking a bit worse for wear, while Younis, gloves off, comes down the wicket with purpose, not caring much for the state of the game, to embrace his friend and put a fatherly hand around his shoulder. And that is it, the last bit. It’s what they have always done, and will never do again, forget the emotions and go about their business”

An athlete is often compared to death as a metaphor when they decide to retire. It is the process of life after death for them, a new life, new career, new view in making decisions, and this time it’s not the country which they think about it’s their families.

However, when talking about Younis Khan and Misbah-ul-Haq, this metaphor does not apply, because no matter how many years go by and how many years go by, Pakistan will not produce another duo like ‘MisYou’. What is most commendable is that no matter what life threw at these titans, the duo did everything they could have possibly done to make every Pakistani proud.

“Whenever you think back, you think I’ve done this and that, you always have a feeling I could’ve done this a little better. I tried all that I could on my part, with whatever authority and responsibility I had, whatever was in my hands, I did what I could. I tried my level best with this team.”– Misbah-ul-Haq

ICC Champions Trophy 2017: These 12 Cricketers Will be the X-Men of the Game

From 2002-14, a black cloud had surrounded our Maximus, he witnessed the loss of 7 family members (and friends) and had reached a low point in life. They included his father, three siblings, an adolescent nephew, a brother whom he described as his first cricket coach, and a cricket coach he described as a father.

All these departings occurred while he was away on tour, and was exhausted. However, despite what happened in his personal life, he stayed professional and continued to strive to give everything he had with each stroke he took.

“Patience is very important. The other thing, for captaincy, is that the most difficult task, you go there and do it yourself. If you do, then automatically players get behind you and start playing their roles.”