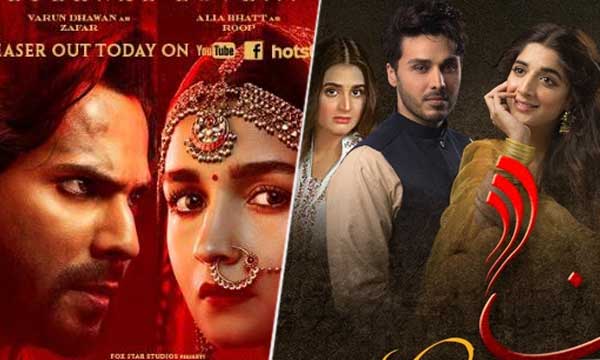 The teaser of Bollywood’s star-studded movie ‘Kalank’ was unveiled yesterday and it created all the buzz on the internet.a

Helmed by Abhishek Varman, the cast of the period drama includes Sanjay Dutt, Madhuri Dixit, Alia Bhatt, Varun Dhawan, Sonakshi Sinha, and Aditya Roy Kapur and the teaser proved to be a treat for Bollywood lovers.

Have a look at the teaser!

Mehwish Hayat Opens Up About Getting Tamgha-I-Imtiaz

As soon as the teaser was released, a number of internet users started comparing the upcoming movie with Pakistan’s on-going star-studded drama Aangan.

Unintentionally, I feel like there are similarities between Bollywood film #Kalank & Pakistani TV drama #Aangan. Top stars in an ensemble cast, pre-partition drama… Imagine if everyone could have worked together and collaborated on one massive project across both countries.

Unintentionally, I feel like there are similarities between Bollywood film #Kalank & Pakistani TV drama #Aangan. Top stars in an ensemble cast, pre-partition drama… Imagine if everyone could have worked together and collaborated on one massive project across both countries. 🙏🏾 pic.twitter.com/uA9j6JbbfW

A number of his followers agreed to him and said that Indian producers always watch Pakistani content.

Look what people have to say!

We know they cheat. Kjo secretly watches pak dramas and otherwise they talj rubbish about us

Dastaan was an epic no bollywood film can match it’s beauty. After Dastaan, Aangan is a masterpiece and template for period plays/films. Copycats from across the border cannot match it’s magnificence.

That was the dream. KJo would've signed many Pakistani stars if not for the current political climate.

And some simply disagreed to him!

The two might be set in pre partition but angan is more intense tv drama whereas kalank looks more comercialised with glamourous outfits and songs pictured on a grand scale KJo style! However im enjoying angan and looking forward to kalank😊

Angan is based on a novel which is quiet an old one. Before it was dastaan which was epic. So i suggest you to not compare your bollywood movie with these tv shows cuz these are based upon famous novels and reality unlike overdramatic so called historical bollywood movies.

Have a look at Aangan’s trailer!