Home Brandsynario Exclusive Chaudhry The Martyr: A Biopic That Drops The Ball Despite Good Intentions
Advertisement 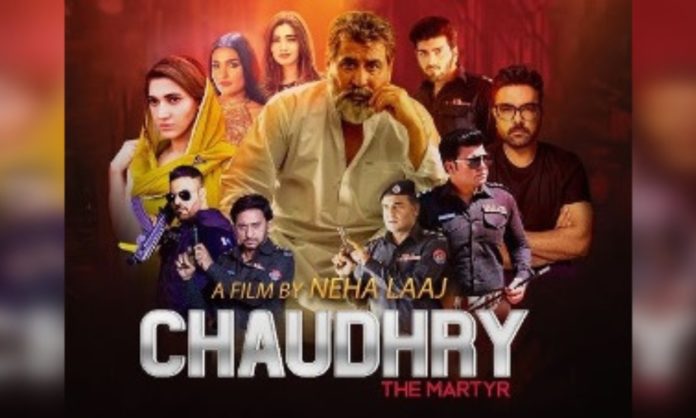 Chaudhry Aslam was a Karachi-based Pakistani police officer, who rose to fame for his bravery and fearlessness. He arrested several criminals‎, terrorists, eradicated gang wars, and extortionists belonging to different political parties particularly when unrest in Karachi was at its peak. Unfortunately, in 2014 he was killed in a targeted bomb blast.

To pay tribute to this courageous encounter specialist, a biopic under the production of Neha Laaj, directed by Azeem Sajjad was released on June 24th titled Chaudhry The Martyr.

It is an extremely rare genre that is explored within the Pakistani film world precisely because it is a delicate territory and the stakes are high in retelling a real life story. Few films in history have managed to toe the line between fact and creative liberties and this one clearly falls flat.

Written by Zeeshan Junaid, the film features Tariq Islam in the title role, who also happens to be a cousin of Chaudhry Aslam and is a DSP himself. The casting seems right as far as the looks are concerned, the resemblance is there which, of course, is an important aspect in a biopic but as far as the facial expressions, command over dialogue and mannerism, with exception to the white shalwar kurta and salt n pepper beard are concerned, Islam fails to deliver a good performance.

There are a few other actors in the movie, but they play underdeveloped characters and fail to impress. Bhurra, the Bengali gang leader played by Amir Qureshi was frankly, quite unbearable. You also get to see Arbaaz Khan – whose voice is dubbed by someone else and the sound quality is overall very poor overall – and Azfar ( from the famous Azfar Mani show) as police officers appearing off and on in between scenes. There is another couple whose love story has been used as the most nonsensical plot device adding to the already yawning narrative. However, Kallu another gangster played by Sohail Sameer, Shamoon Abbasi and Saleem Mairaj justify their roles. Not to forget there is Sana Fakhar too as Aslam’s young wife.

To add a bit of spice, there is an item song Aatish performed by Amna Illyas who looks pretty and has done a great job, however, she could have been dressed in a better costume though. Choreographed by Wahab Shah, the song is a bit of relief for it has been shot and edited creatively.

The film also stars Yasir Hussain as Kashaan, a young journalist interested in documenting the life of Chaudhry Aslam. He narrates most of the incidents taking place in Chaudhry Aslam’s turbulent life and the film keeps fluctuating between the present and flashbacks, trying to capture history chronologically in the worst of manners.

One simply wonders it would have cost less finance and struggle to the makers had they opted for a documentary rather than a drag feature-length fiction.