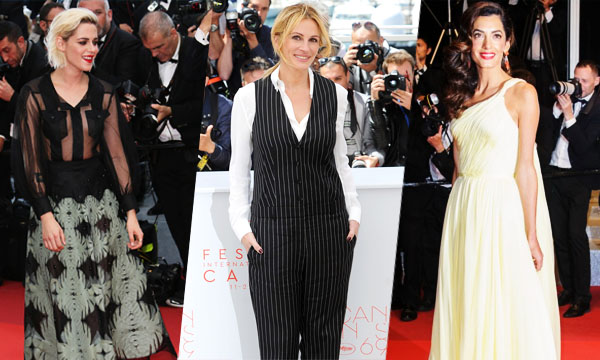 The Cannes Film Festival 2016 is well and truly underway, and the stars have been taking the opportunity to experiment with their red carpet beauty looks.

Lily-Rose Depp played it cool at the photocall for her film “La Danseuse” (“The Dancer”) with shaggy hair, low-key hoop earrings, and natural brows. A smoky eye injected glamour into the look and a healthy dose of Chanel’s Joues Contraste blush in ‘Pink Explosion’ brought out the actress’s angelic bone structure. We’re used to seeing Kristen Stewart take a grungy approach to the red carpet, but the actress went full-on bombshell for the screening of her film “Cafe Society.” A smoky eye and deep red lip contrasted beautifully with her new blonde bob. Amal Clooney scored major style points at the screening of “Money Monster” by matching her orange-hued red lipstick to a pair of unusual Cartier earrings in platinum and white gold with coral beads. She kept the rest of her look classic, with loose waves pulled over to one side of her face and minimal eye makeup. Jessica Chastain’s heavily embellished taupe dress had more than a whiff of the 1920s about it, so it was only natural that the actress chose to wear it with loose finger curls to commit to the look for the screening of “Money Monster.” Her smouldering eye makeup offset the nude tones of the piece perfectly. Julia Roberts pulled her hair back into a chic low ponytail with strands left loose around her face to frame her features during the “Money Monster” photocall. The style also showed off a rebellious ear cuff. What were your favorite looks at Cannes Film Festival 2016?