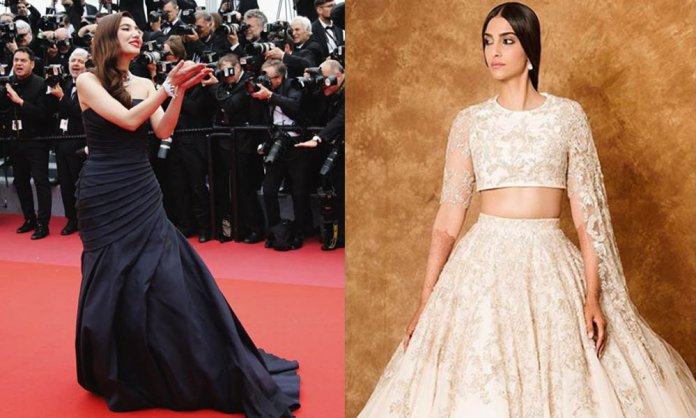 Monday evening saw many glittering beauties walking down the red carpet at the Cannes International Film Festival 2018. And amongst them was our Pakistani beauty, Mahira Khan.

Looking elegant and classy in a stunning black dress, Mahira managed to grab a lot of eyeballs at the grand affair last night. And with her beauty and charm made her a showstopper, it seems that others next to her seemed to pale a bit.

Wearing a Ralph and Russo lehenga with simple Chopard earrings, Sonam styled her look with a loosely tied braid and an intricately detailed ‘paranda’.

The two beauties were seen walking the red carpet together.

But we couldn’t help but notice that while Sonam looked a bit tired, Mahira looked resplendent and positively glowing.

Taking to her Instagram, she shared this pic and was seen thanking her near and dear ones for making this moment a possibility for her.

Ode to the people I have loved so much.. and have inspired me since I was a little girl. Starting from my Ama to Minaal and Rooha… down to all my girls back home in Pakistan 🇵🇰💋

Ode to the people I have loved so much.. and have inspired me since I was a little girl. Starting from my Ama to Minaal and Rooha… down to all my girls back home in Pakistan 🇵🇰💋 #lorealparis #lorealcannes #cannes2018 #lorealpkatcannes

Earlier in the day yesterday, Mahira tweeted about her dress for the event being stuck at customs.

However, the charming lady pulled it off wearing a black, pleated dress.

The Pakistani beauty was seen sporting a fresh face of makeup, signature red lips, and wavy hair that she pulled off to the side.

However, the two neighboring countries actresses seemed to share a warm camaraderie before and during the event, even taking to social media to wish each other all the best.

It all started when Mahira Khan was seen congratulating our Bollywood babe Sonam for her wedding with her long-time beau Arjun.

This is what Mahira had to say to Sonam:

Sonam congratulations! Wishing you a lifetime of joy and happiness. Inshallah. Lots of love x @sonamakapoor

Sonam later was seen thanking Mahira for her wishes and shared her excitement about hanging out with her at Cannes.

Thanks so much mahira! Can’t wait to hang out with you at cannes! https://t.co/VkR1kVedzB

After which, Mahira was seen re-tweeting Sonam’s tweet and added her own response:

And it’s not all talk either! Pictures from the event revealed that the two were seen having a gala of time together.

@mahirahkhan & @sonamkapoor spreading love across borders! We are in love with #sonamkapoor’s dress! Stay tuned for more updates!

Well, we must say that it’s positively refreshing to see two artists from the neighboring countries sharing such a beautiful bond at an international festival!

We hope that many more friendships between the two countries artists thrive as much as these two’s! What did you think of Mahira and Sonam’s look? Let us know in the comments.

Meanwhile, take a look at Mahira’s other looks from Cannes below: