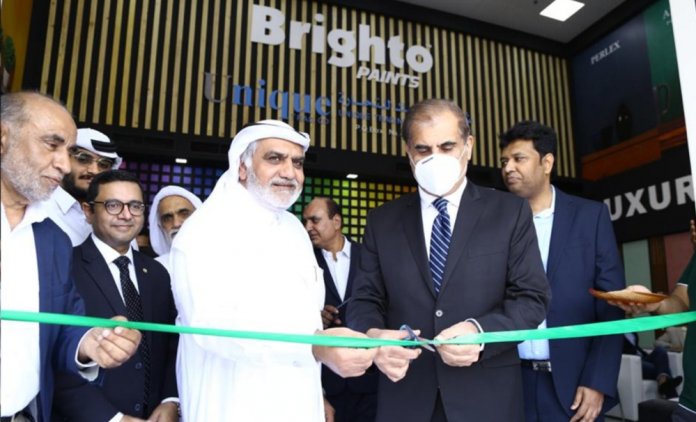 Brighto Paints has made continuous efforts to solidify relations with the State of Qatar, as shown by the fact that H.E Syed Ahsan Raza Shah, the Ambassador to Qatar, was present at the opening of this second Brighto Paints showroom.

H.E Syed Ahsan Raza Shah went on to reminisce on his last visit to the Brighto Paints Showroom in Abbottabad, Pakistan, which he visited due to his paint needs. There he saw his picture of inaugurating the first Qatar showroom was proudly hung, further cementing the unified resolve with which Brighto Paints aims to take forward the relations of the two countries.

This had a significantly positive impact on the brotherly intentions of Pakistan towards Qatar and Brighto Paints, playing its part to the utmost in conveying that message.

Chairman Unique Trading Company Mr. Abdulrahman Mohammed Al-Muftah, also in his address at the inauguration, expressed his continued trust in the partnership with Brighto Paints on account of his past visits to Pakistan and the standard of work being done which matched the strictest international standards of procedure. He went on to mention the friendly and cooperative nature of the Pakistani business community, which makes them ideal partners for carrying out further international ventures.

G.M Mr. Imran Rafique presented a short video and delivered a keynote on the relation between Brighto Paints and Unique Trading Company over the past two years. With the initial visit of chairman Mr. Abdulrahman Mohammed Al-Muftah to Pakistan during which the unjust blockade by other countries on trade with Qatar was being implemented, Brighto Paints endeavored to extend its cooperation as representatives of Pakistan by engaging in economic ventures and prospects.

Regarding the journey of both partners from the inauguration of the Brighto Paints plant in Faisalabad by Mr. Abdulrahman Mohammed Al-Muftah during his first visit to Pakistan to Unique trading company becoming the primary distributors of Brighto Paints products in Jhelum and neighboring districts in March 2020, Mr. Imran Rafique commented that he is “optimistic for the future and is delighted to be a part of the growing relations between two brotherly countries.”

The partnership between Brighto Paints and Unique Trading Company sought to materialize their vision of revitalizing Pakistani and Qatari relations by increasing trade through the opening of the second Brighto Paints showroom in Qatar.

Chairman Unique Trading Company Mr. Abdulrahman Mohammed Al-Muftah shared views with H.E Syed Ahsan Raza Shah the Pakistani Ambassador to looking forward to the opening of the third showroom of Brighto Paints in Qatar soon during the attendance of prominent Pakistani and Qatari personalities such as Fawad Rana, Rasheed Khan, Saeed Gul among others dignitaries and business people.