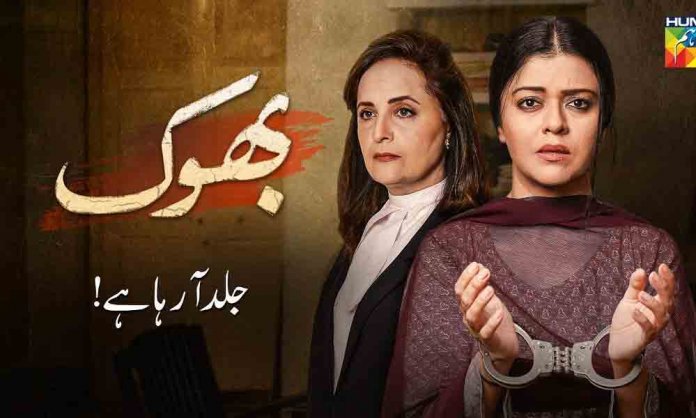 The heart-rending drama is produced by Moomal Entertainment and is directed by Mohsin Ali.
Its story revolves around the sheer suffering of a mother who, driven by poverty and subsequent dismay, ends up killing her own children.

The popular Humsafar actress, Hina Khawaja Bayat is also featured on the poster alongside Maria. It seems she, too, is a major part of the plot.

The drama is based on mature, harsh, and a very real plot which will make it an eye opener for the audience.

HUM Network is making this drama specifically for Ramzan, hence it will be a short series consisting of five episodes only. Repeat telecast will also be available on the channel.

The third teaser is as intense as the other two. It shows children imploring their mother for food, while the mother’s eyes are overflowing with resignation and despair.

How poor does one have to be that their situation forces them to kill their own offspring?

How does a mother feel when she has to choose between eating herself and feeding her children?

What action does the judiciary take when a mother is presented in court for doing the only thing she could do?

Who do we hold responsible for such barbarity?

Among other exciting shows part of the Ramzan transmission 2019, Bhook is definitely one we’re looking forward to!

Naeema Butt and others

Timings of Bhook drama are yet to be announced.