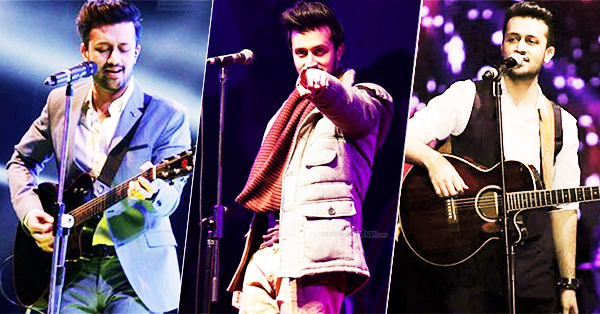 Long before Coke Studio made Atif Aslam a solo name for himself or even Bollywood and Hollywood made him a household name in the music industry, Atif Aslam was a talented young singer who started off his musical career like every other unknown musician does, ‘creating a college band with your classmates.’

Atif Aslam first came into the limelight when he released the hit track Aadat, along with the band Jal, later featured on his solo debut album ‘Jal Pari.’ His claim to fame did not just stop with his debut album and his consequent sophomore album, Doorie released in 2006 and 2008 hit album, Meri Kahani. Adding to that was his appearances in Coke Studio, his various songs that have featured in not only Pakistani films but also on Bollywood films, have all added to his very glorious singing career.

Here is a look at some of Atif Aslam’s hit singles over the years. Listen and enjoy!

When Aadat was released and  Atif Aslam was still a part of Jal, it was all anyone could talk about. Even after his departure from the band and the subsequent re-release of the song, this track to date, remains one of the tracks that is still reminisced by all!

Back when Atif Aslam was establishing himself as a solo name in the music industry, his  song Woh Lamhe, took the Pakistani and Indian music industry by storm when this song was released as part of the soundtrack of the film Zeher.

So much was the hype of the song that it went on to be nominated for four awards at the Filmfare and IIFA and the Zee Cine Awards.

To this day, Jal Pari remains one of Atif Aslam’s most successful albums. Bheegi Yaadien despite not being featured in any movie, still remains one of his most popular songs along with Aadat and Woh Lamhe.

With a hit debut album under his belt, there was no stopping the power singer. Atif Aslam’s second record, Doorie, established him more of a hit with songs such as Kuch Is Tarah that went on to be featured in a Bollywood film after its release.

The title track from Atif Aslam’s sophomore album, Doorie after years of being released, still remains one of his more lyrically strong songs out there.

Hum Kis Gali, further cemented Atif Aslam’s credibility in the music industry- with catchy lyrics and a fun video, the song turned out to be another hit from the Aadat and Woh Lamhey powerhouse vocalist.

Shoaib Mansoor’s Bol became a hit for all the right reasons! With a stellar cast and a story that defined the odds, it had all the ingredients for an amazing flick.

What was even better was the collaboration of Atif Aslam and Hadiqa Kiani for ‘Hona Tha Pyar’ that went on to win and get nominated for several awards at the LUX Style Awards and the Pakistan Media Awards.

Despite having a clichéd story, Ho Mann Jahan’s soundtracks can be credited as some of the best tracks ever.

Based on Mohsin Hamid’s book of the same name, The Reluctant Fundamentalist’s soundtrack struck right in the feels, comprising of both Eastern and Western artists.

Atif Aslam’s Mori Araj Suno, combined with a powerful montage during the movie, set the tone for one of the most impressive tracks.

Originally performed by the Sabri brothers, Atif Aslam’s soulful rendition of Tajdar-e-Haram in Coke Studio 8 made waves as soon as it was aired, becoming one of the most viewed songs of Coke Studio, with 40,151,168 views, till date.

Pertaining to the same romantic flick, Tu Jaane Na was one of Atif Aslam’s most soulful renditions- the tragic song will sure make you long for your ‘lost love’. The song was nominated in the IIFA Award for Best Male Playback Singer.

Starring Varun Dhawan and Yami Gautam, the hit flick, Badlapur was a tragic love story about murder and revenge. The romantic track, Jeena Jeena by Atif Aslam sure set the temperatures soaring with his melodious voice! The song was nominated as the BIG Star Most Entertaining Singer (Male) & Filmfare Award for Best Male Playback Singer.

It’ll be accurate to call Atif Aslam the ‘King of Romantic’ tracks! Sung in collaboration with Chinmayi Sripaada, the melodious track was nominated at the World Music Awards for World’s Best Song! Even though the film was not a major hit, the song garnered quite a lot of praise and attention owed to the ‘Atif Aslam’ magic!
Which one of these are your favorite?