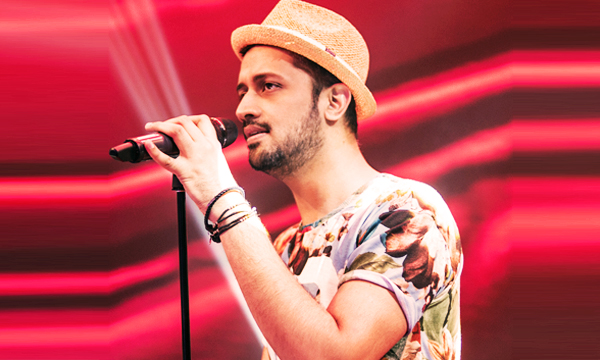 Back in 2002, when Aadat was released, every fan boy’s mission was to learn how to play that song! Mostly because heartthrobs Atif Aslam and Gohar Mumtaz were the talk of the town amongst all the ladies and what better way than to impress them with their one hit wonder.

But the thing about one hit wonders is, sometimes it leads to band members not always ending their relationship on the best of terms. Atif Aslam became an even more successful musician with not only the release of his solo debut album Jal Pari but also with his various movie stints and soundtracks that he worked on, not only for Pakistani films but for Bollywood films as well.

His success is not limited to Pakistan or our neighbor India, but in fact abroad as well. His success in the international arena can also be credited to Coke Studio, where he made his debut during the second Coke Studio season.

Right after the release of his debut record, Atif Aslam made an appearance on the most watched live musical television show of our time.

Let’s take a trip down memory lane with Atif Aslam’s most memorable appearances on Coke Studio.

This was the year Coke Studio decided to launch their episodes with a twist. Naming each episode, and expanding their house band along with the number of musicians that performed this season.

Atif Aslam appeared on the first episode and performed the title track from his debut album. Rohail Hyatt returned as the executive producer for this season once again along with his wife Umber Hyatt as the producer of the show.

Although not one of his most top-notch performance, it did, however, mark his name in the music industry once again.

As it is with most artists, Atif Aslam performed on each episode of the second season.

In the next episode titled Harmony, Atif Aslam, and Riaz Ali Khan performed a duet for the song Kinara.

With the King of Pop, Michael Jackson’s death still fresh in the minds of his fans, there was no better way to commemorate the memory of the man famous for his moonwalk.

Atif Aslam performed a beautiful rendition of the song Billie Jean to pay homage to the King of Pop, Michael Jackson.

Produced by Rohail Hyatt, Atif Aslam performed a Sufi rendition of Mai Ni Main, which was hailed as one of the best performances of the episode.

The final episode of the second season saw 7 performances in the finale. With the Strings making a comeback after first appearing on the first season of Coke Studio.

The episode was released on Independence Day and keeping in with the spirit of the day was rightly titled as Unity. With seven performances and some of the most successful artist our music industry has produced, this was hailed as one of the best season finales.

Known as the comeback season, several familiar faces made an appearance made a comeback in the fifth season of Coke Studio.

However, on the first episode, Atif Aslam appeared as a guest artist for a performance of Charkha Nolakha originally done by Nusrat Fateh Ali Khan, along with the rock band Qayaas.

Faiz Ahmed Faiz’s poetry made its way into the music industry when Atif Aslam performed a version of his poetry on the second episode.

The fourth episode of the season might forever be remembered by the appearance of Bohemia who performed alongside The Chakwal Group on the song Kandyaari Dhol Geet, however, Atif performed Dolna, garnering praise for his performance.

After the departure of Rohail Hayat and Umber Hyatt, the duo of Strings took over the producing responsibilities of the show.

Season 8 till now can be dubbed as the most successful season of Coke Studio. Some might prefer to think that it was because of the producer’s others begged to differ and after season 7 took a slight turn in the wrong alley many were skeptical about the new season.

However, all doubts took a step back when the first episode of the new season was released. Atif Aslam’s tribute to the Sabri Brothers till now remains one of the best songs of Coke Studio.

11. Man Aamadeh Am with Gul Panra

So which one of these Atif Aslam tracks do you like the most? Let us know in the comments below.